COLORADO SPRINGS, CO – Freightliner may have drawn on a familiar name when unveiling the 2018 Cascadia, but the company’s newest truck promises to boost fuel economy, improve driver comfort, and leverage electronic tools like never before.

“We have changed almost everything on this truck,” says Richard Howard, senior vice president – sales and marketing for Daimler Trucks North America, referring to the 2018 Model Year designs that begin production in early 2017. “Starting with the best truck is the best place to start.”

It has already attracted some of North America’s biggest truck buyers, too. The first 2018 Cascadias have been purchased by 12 fleets that collectively operate one out of every four of the previous Cascadia models. Canada’s Bison Transport is among those buyers.

“This is a great-looking truck,” said Don Streuber, Bison’s executive chairman and CEO, as fleet executives crawled over the first of the new models. “We’re excited to bring it into our fleet and we’re excited for the fuel economy it will bring.”

Daimler has not expressed the potential fuel economy in miles per gallon, since everything from weather to loads and roads can play a role in that. But a test run between Detroit, Michigan and Portland, Oregon showed that the new Cascadia betters the Cascadia Evolution’s fuel economy by a full 8% thanks to spec’s including a new AeroX aerodynamic package with long flex extenders, drive wheel fairings, air dam below the front bumper, and a 2.16 ratio, the company says.

The boosted fuel economy is no small feat. The original target was to better the fuel economy by 5%, and the Cascadia Evolution had already been recognized as Freightliner’s most fuel-efficient model.

The most fuel-efficient versions of them all will be identified with a blue “I” in the Cascadia name badge. That will mean the truck combines an integrated Detroit powertrain and an Aero package or upgraded AeroX package.

Compared to the base model Cascadia on the road today, a 2018 Cascadia that leverages all available aerodynamic and powertrain enhancements will cost another $15,000 but boost fuel economy by 19%, says Martin Daum, president and CEO of Daimler Trucks North America.

The changes have not been limited to fuel economy alone. A new front suspension has been included for a smoother ride, and the steering gear has been moved forward to improve turns.

Inside the cab, an enlarged driver information display can be controlled with simple buttons on the steering wheel, and offers information using plain English rather than speaking in codes. If a driver drifts over pavement markings, the display will show a corresponding red line next to a truck icon, and that will be combined with an audible rumble. Yellow and red trailer icons appear when following distances are too close for comfort. And even those vary by conditions. At 45 miles per hour, for example, the warning will sound if the truck is within 2.7 seconds of a vehicle ahead of it for longer than 10 seconds. Slower speeds allow closer distances.

“The reason we have a 10-second lag is because we all know of cars coming in and out,” says Scott Kuebler, general manager – component sales.

The information on following distances comes from Detroit Assurance 4.0 radar, which boasts a 250-meter range compared to its predecessor’s 200 meters. Active Brake Assist will now fully apply the brakes to help avoid collisions with stationary objects, while warnings will be sounded about nearby pedestrians. That’s just one generation behind a Daimler system in Europe that also actively brakes when identifying pedestrians.

The warnings are not for drivers alone. The same information on the dash display can be shared through telematics systems, and fleets will be able to alter the parameters they want included in the reports.

Anyone who wants Detroit Assurance, however, will have to have a Detroit powertrain,” Kuebler adds. “If you want [Meritor Wabco] OnGuard, in the new Cascadia, it’s with a Cummins engine.”

Enhancements to the truck’s visibility extend beyond electronic tools as well. The windshield is 12% bigger than that found on the current Cascadia, and the headlights are LEDs. Options are also available to heat the hood mirrors, to keep them clear of ice and snow.

The new truck will come with three trim packages, including a standard Professional level, and optional Elite exterior and interior packages.

Unwanted buss, squeaks and rattles – including those that some drivers have noticed in existing Cascadia sleepers – have been tackled by incorporating everything from a third door seal to an optional layer of 3M Thinsulate insulation. Engine mounts have also been enhanced, while the cover of the engine tunnel is made with something known as Quiet Steel technology.

Additional storage space and the layout inside the cab emerged through a partnership with Teague, which is known for designing Boeing aircraft interiors.

There are bigger spaces to accommodate larger microwaves and fridges, and the interior is lit with dimmable LED bulbs. There are even three cup holders up front, compared to the previous Cascadia’s two.

Back in the sleeper, an optional dinette area can be transformed into a murphy bed in about 10 seconds. Two seats flip down, the table lowers, and a bunk that otherwise sits against the back wall drops into place over it all. When the dinette is assembled, one of the two seats is also positioned at an angle, ensuring that legs don’t tangle under the table. It all betters an earlier attempt to provide such an option in the existing Cascadia. “It was kind of a pain to put down and put away, and the mattress wasn’t very comfortable,” Schaefer admits. The seats in the updated version can also lift to reveal storage down below.

For those who don’t need a top bunk there is the option of dedicated storage shelves with a lip. When an upper bunk is spec’d, it can be accessed with a sturdy telescopic ladder. And a swivel bracket has been installed to support up to a 26-inch flat panel TV.

Other features were designed specifically with mechanics in mind.

“At the end of the day it’s still a machine, and we get that, and every machine has to be serviced,” said Toby Faulkner, director – new Cascadia development.

Those features include splayed frame rails to improve access around the engine compartment. And most Electronic Control Units are now stored in a new eVault, behind the fuse and relay box that can be accessed without hand tools. Inside the cab, HVAC blower motors can be accessed by simply removing a top panel on the dash.

The new two-piece bumper can even be removed by a single person, and that feature came from a focus group of technicians.

“This is one we [initially] got wrong, and the technicians were very clear we had to go back to the drawing board,” he said.

Connectivity for the masses

Matt Pfaffenbach, director of connectivity, refers to the truck’s new Detroit Connect Analytics system as “connectivity for the masses”, which will deliver vehicle data through a portal for maintenance managers, fuel managers, safety officers, and fleet managers alike. That will be launched this fall. And every 2018 Cascadia owner will receive the service for five years, effectively covering the first life of the vehicle. 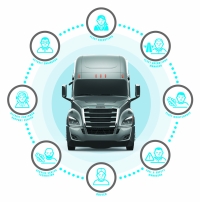 The system will focus both on fuel economy and safety. If a truck is performing better or worse than a counterpart with similar spec’s, fleets will receive a warning and the data to understand why. “That gives a good analysis of apples to apples,” he says, referring to the way fleets can compare common spec’s and similar operating conditions. “We can then identify the vehicles that are outliers.”

Remote diagnostics will be available through the Virtual Technician system. Also coming next year will be the ability to remotely update engine, transmission and aftertreatment firmware, and fleet parameters governing road and cruise speeds, cruise power and speeds, idle shut down, and temperatures. No wires required.

It all adds up to a product that plays an important role in Freightliner’s future. The Cascadia that is on the road today was recognized as playing a key role in giving Daimler Trucks North America a 42.6% Class 8 market share.

Think of it as an important evolution for the Evolution. And make sure to check out Jim Park’s video report below.