MONTREAL, Que. — Volvo’s new VNR regional haul truck made a flashy debut at ExpoCam this week, in front hundreds of customers, dealers, and industry press. The truck, which will replace the VNM, features a more modern interior and aerodynamic design.

It will be about 3.5% more fuel-efficient than a VNM with GHG14 engine, according to Wade Long, product marketing manager, Volvo Trucks North America.

Brian Balicki, chief designer, said Volvo looked to motorsports for inspiration, and set out to design a truck that embodied the terms: bold, edgy, innovative, modern, and human.

“We really translated these statements into the product,” Balicki said at the ExpoCam launch. “We wanted to make sure this was an iconic design, that many years down the road this will still feel very modern and people will know from very far away that this is a Volvo truck.”

The exterior features a redesigned hood that provides better visibility of the road. It’s also 70 lbs lighter. A new honeycomb-style grille gives the truck an updated appearance. Headlights are mounted in from the edge of the fenders to prevent damage. The three-piece bumper has two replaceable end caps that can be swapped out when broken.

The interior of the truck is more homey, with an automotive-inspired design and many new amenities for the driver. For example, a refrigerated passenger seat, where a driver can store beverages within reach. Balicki said Volvo looked to the airline industry for inspiration when designing the interior, specifically at how first class cabins are designed.

“With the new VNR, we brought aesthetics – it’s pleasing to the eye – and we brought aerodynamics to a segment that has not historically had that brought to them,” said Long.

The new grille was designed to optimize air flow, and comes with a chrome bezel grille surround. Options include rain-sensing windshield wipers and automatic headlights. More than 2,000 drivers were interviewed during the design process, Long said.

“Regional drivers had different needs,” he said. “There are more requirements for ingress and egress, they’re in and out of the cab frequently. We wanted to make sure our VNR was designed around that.”
Three interior levels are offered. The cab features a new modular rail system with cupholders that can be placed exactly where the driver wants them. And there is no shortage of power options; there are multiple USB and 12-volt power outlets in the front and up to 12 in the sleeper.

Long said the steering wheel has been redesigned and can now be rotated 32 degrees, with a 4.5-inch telescoping range. There’s also a 30-degree head tilt feature. Long said this was done to make comfortable a wider variety of drivers.

“The stature of the driver pool is changing,” he said. “We can accommodate the shortest to tallest driver.”

Interior lighting also received a lot of attention. Cool blue lighting is provided throughout the cab, because research indicates that color makes drivers feel better rested at the end of a driving shift. Red reading lights are available and a new “puddle lamp” shines from the bottom of the door onto the steps and ground when the door is open. Deeper door pockets are provided for increased storage.

Long said the seats have also been redesigned, providing two inches of additional travel and improved positioning, including a lower hip point for shorter drivers. There are seven seats available, in all interior packages.

Volvo achieved a 113-inch bumper-to-back-of-cab (BBC) measurement, while adding four more inches of corner visibility, due to the new hood. The 3.5% fuel efficiency improvement is due in part to the more aerodynamic design, but also enhancements to Volvo’s D-series engines. Long said the D11, which is now available with up to 425 hp, will be a popular option in the new VNR. It provides customers with about 365 lbs in weight savings compared to a 13-liter. Design improvements have taken about 175 lbs out of the truck. The VNR shown at ExpoCam weighed in at 14,500 lbs, dry.

The new truck will enter production in August, but orders are being taken immediately. The tagline for the VNR was “the shape of trucks to come,” suggesting, just perhaps, that a new linehaul tractor is in the works. But Volvo officials were unwilling to share any details about other models that may, or may not be, in development. 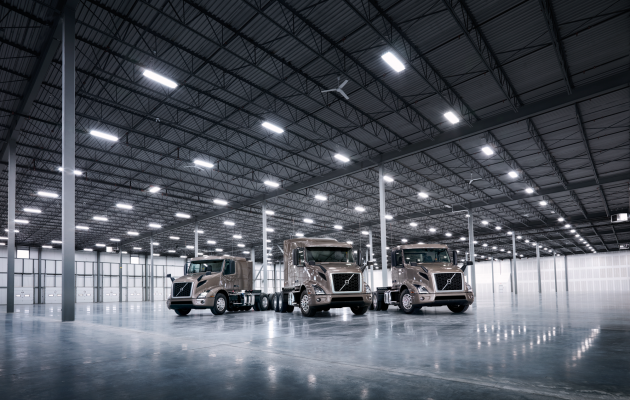