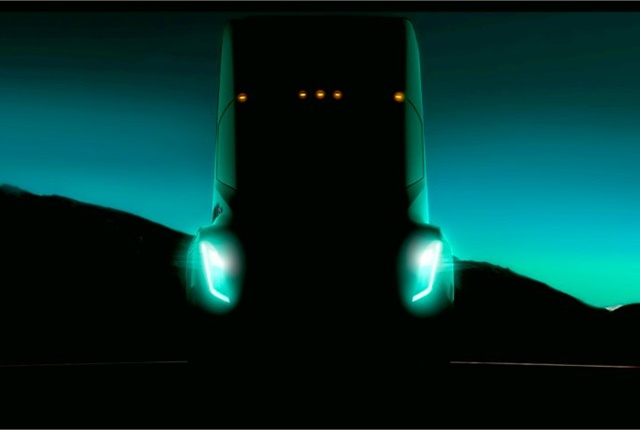 A few days ago we got our first glimpse of what might be Tesla’s Electric Semi, as company CEO Elon Musk calls it. It looks futuristic, but it also looks like a high-roof over-the-road sleeper truck – which is exactly the wrong application for a fully electric drivetrain.

In his widely read “Master Plan — Part Deux,” Musk wrote that electric trucks are needed in the marketplace. I’m not so sure about that, and apparently neither are thousands of fleets around the country who have yet to plunk down penny-one on the concept.

We already have fully electric semi-trucks out in the market earning owners some return on their investment. They are in specialty applications such as drayage and local pickup and delivery. There are fully electric yard trucks from Kalmar, OrangeEV, and local daycab trucks from Transpower and others, along with electric refuse collection trucks and even school buses.

So what’s the big deal with Tesla’s electric semi? My theory is that Musk is stirring up interest in the investor community, especially the investor who doesn’t understand trucking but sees a battery-powered tractor-trailer as way to finally rid the world of diesel trucks.

Ten days after Musk tweeted that the electric semi was coming – “Tesla Semi truck unveil set for September. Team has done an amazing job. Seriously next level,” – industry analyst John Peterson brought the discussion back to ground level with a blunt appraisal of Musk’s move in a piece titled “Tesla’s Semi Truck: Too much weight and a decade too late.”

“The tweet shored up a sagging stock price and resulted in bullish research notes from two analysts who wildly overestimated the impact on Tesla, Paccar, Cummins and the trucking industry,” he wrote, adding, “It’s clear to me that none of the players in this evolving melodrama understands the trucking industry, its operational requirements or its environmental challenges.”

Watching this play out in the blogosphere and on all the tech-commentary websites, it’s clear that crowd is fascinated by the prospect of an electric tractor-trailer. What they clearly don’t get is the hard reality of making an electric truck practical. Unless Elon Musk and Tesla have completely reinvented the battery, there’s no way that truck would be significantly better than what’s already on the market. Those offerings include day-cab tractors that weigh 20,000 pounds or more because of the massive banks of batteries required, and have a range of somewhat less than 150 miles.

Okay, it’s a start, and every advancement in battery technology is a step in the right direction, but while Musk himself may disagree, he can no more alter the physical demands on a fully electric drive system for a large truck than he can walk on water. You need so many kilowatt hours of storage capacity to move so many pounds of truck and freight down the road. And at some point when that stored energy is depleted it must be recharged. End of discussion.

You can add a supplementary energy-producing system, such as Nikola proposes using hydrogen fuel cells. Or use a natural gas or diesel-powered generator to shore up the batteries. But then you don’t really have a truly emissions-free electric truck, do you?

A Bit of Both

There are workable ideas floating around for electric trucks, like one we just heard about from a company called Tevva. The UK-based company is about to unveil here an “extended-range” straight truck that is battery powered but has a fossil-fuel powered generator to top up the charge when it starts to dwindle. While operating in urban environments, where emissions concerns are highest, it’s on battery. When an opportunity arises to top up the charge with fewer environmental consequences, the engine comes on. I think that approach is sound and reasonable, but unfortunately it will probably cost much more than the market is prepared to pay for such a truck.

Remember all the hype surrounding hybrid power systems a few years ago? Where are they now? Everyone thought the hybrid was the way to go. Dozens of start-up companies came and went. A handful of long-term industry partners waded into, and then out of, the hybrid market.

The reason was the cost. Even with massive government subsidy programs, the trucks didn’t exactly set the market on fire. The ROI just wasn’t there.

To be fair, there are niche applications where diesel-electric hybrid power is still used, such as bucket trucks or refuse trucks. And there is some new hybrid activity, such as the hybrid trailer drive axle from Hyliion Inc. and Ford’s Advanced Fuel Qualified Vehicle Modifier program. But overall, there’s less going on in the way of R&D on those systems.

I think the Tesla Electric Semi has but a single purpose: to keep investors intrigued until the company figures out how to produce at a profit on its touted $40,000 all-electric family car.

Musk may think trucking needs electric trucks, and we probably do, but not the kind of truck he appears to be about to offer us. I’m sure we’d all be more interested in a boring little daycab that could hustle trailers around town or run from point A to B and back dependably on a charge. An all-electric on-highway sleeper-cab would be more than a white elephant right now.

But before dismissing the Tesla Semi entirely, it’s worth noting that at least one key member of the development team at Tesla has some real-world experience with big trucks: Jerome Guillen. From 2007-2010, Guillen was the general manager of Freightliner’s Cascadia program, and was responsible for the development and introduction of a new generation of Class 8 trucks, his Crunchbase page indicates. “Jerome managed all aspects of the development of the product line, including engineering, marketing, finance, purchasing, manufacturing, and quality control,” it says.

In a tweet from July 16 Musk said, “Jerome is driving Tesla Semi & doing a great job with his team. At Daimler, he led their most successful semi truck program ever.”

In fact, there are said to be several ex-Daimler people onboard with the Tesla project, such as Evan Chenoweth, who was involved with the hybridization side of that OE’s SuperTruck project. (In post-project interviews, Daimler said it didn’t see hybridization as viable in a commercial over-the-road truck)

Maybe Chenoweth and Guillen will be enough to keep the project firmly grounded. Maybe not.

Silicon Valley is great at inventing solutions for problems we don’t yet have, and electric trucks seem to fit into that category. Trucking has very specific requirements for equipment. We’d probably all be happy with an electric truck that was as functional as a diesel, but I don’t believe even Elon Musk can make that happen today.