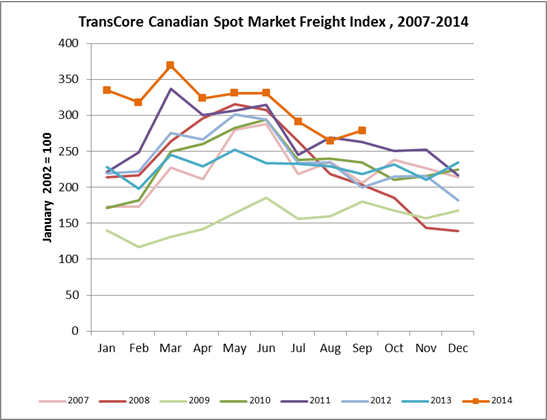 September ended two consecutive months of declining freight volumes, with increases across the board. Month-over-month volumes were up 5% in September while year-over-year volumes surged 28%.

Cross-border loads accounted for 68% of the total; loads into Canada were up 15% and into the US were up 57% year-over-year. Intra-Canada loads were up 22% year-over-year.

Equipment postings were up slightly in September, by 4% from August but down 4% compared to September 2013. The equipment-to-load ratio decreased from 1.95 in August to 1.92 in September.

TransCore’s Canadian Freight Index is derived from its Loadlink freight matching database, which includes more than 13 million loads per year.