TORONTO, Ont. — The Canadian spot market closed out the year strongly, with record-setting freight volumes for the year.

The TransCore Link Logistics Canadian Freight Index set a record high for annual load volumes in 2014, up 33% compared to 2013. Record volumes were set for 10 months in 2014, the most since TransCore began tracking the data.

December’s volumes were up 11% compared to November, marking the third highest month-over-month gain of the year. Volumes were 19% stronger than in December 2013.

Intra-Canada loads were up 10% y-o-y in December.

Equipment postings showed no change in volumes compared to last year, but were down 8% compared to November. The equipment-to-load ratio decreased to 1.66 from 2.01 in November, TransCore reports. 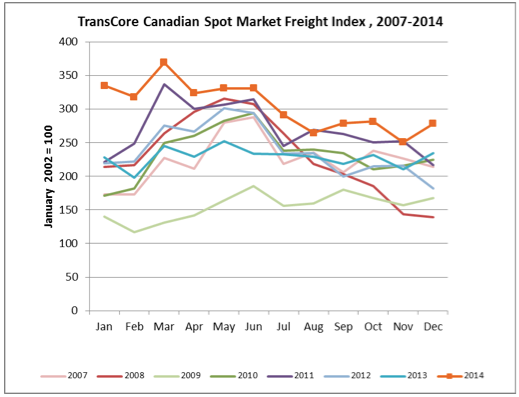