“Mexico is of major importance for Daimler Trucks – not only as a production hub, but also for supplying the country with top products,” said Martin Daum, board of management member for Daimler AG and head of Daimler Trucks and Buses. “Today we strengthen our market position by introducing two new trucks under our highly successful Freightliner brand. With these new 360 models we will be able to serve our Mexican customers even better.” 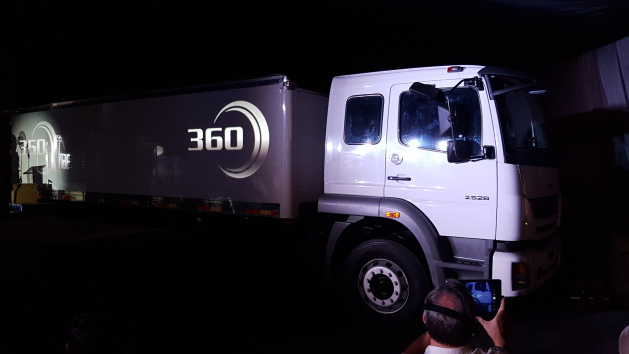 The 2528 comes with a Mercedes-Benz engine with 280 hp and Mercedes-Benz G131 manual transmission, with available extended cab and sleeper cab configuration.

The Class 6 is equipped with a Mitsubishi engine that boasts 170 hp. It has a seven-gear Mercedes-Benz G85 transmission, eight tons of payload, adjustable telescopic steering wheel, and will be available with three different axle distances.

Freightliner offers the two new 360 model trucks with a more customizable chassis, renovated cab layout, two passenger seats, and optimal accessibility due to its wide doors and handles within the cab.

“By releasing these two models, we want to maintain our position of undisputed market leadership in Mexico and capture the cab over engine segment,” said Roger Nielsen, president and CEO of DTNA. “We hope to help transform this country’s commercial vehicle industry in the areas of safety, driver-centric design, and reliability.”

DTNA, which unveiled the new trucks Nov. 14 during Expo Transporte 2017 in Guadalajara, Mexico, said its Mexican division will offer support for the new model trucks with the type of service expected from the Freightliner brand.
Competitive pricing and parts availability from the Spare Parts Distribution Center, dealer network, and Prime Fleet program are also available.

“In response to the characteristics and needs of the Mexican transport industry, it is now possible for us to bring to this market the new generation of 360 trucks that constitutes an innovative family of products to meet the most specific needs of our customers’ business,” said Flavio Rivera, president and CEO of Daimler Trucks Mexico.

Both the 2528 and 1217 come with a three-year warranty with unlimited mileage, and one year of coverage on batteries.

During the 360 launch, Daum said Mexico is “near and dear” to his heart, and that transportation is key to the country’s development.

He admitted that a decade ago, Daimler was not providing the Mexican market what it needed in the commercial vehicle segment, but is proud of the progress his company has made, which now accounts for 40% of the market share in the country.

“Good times for the economy means good times for trucking,” Daum said, adding that the commercial vehicle market is a volatile one that is affected by a country’s infrastructure, people, and economy.

He highlighted that based on these factors, one can calculate how many trucks a country will require any given year, and if sales exceed that mark, a crisis could result.

Daum also pointed to the Chinese economy, saying its market was “incredible”, and that it was possible to see 1.4 million trucks sold in China in a one year span.

With this growing demand, greenhouse gas emissions is a continued concern for DTNA, and Daum said his company must “live up to its responsibility for the environment.”

To accomplish this, Daimler plans to work with its customers and government to establish what is best for both sides, whether that be an electric offering, natural gas, diesel, or an alternative.

Daum said DTNA’s electric vehicle – the E-Canter – shows what is possible with electric trucks, as well as what the limitations are, adding that there is a good reason diesel is the best option for long-haul applications.

In Mexico, Daimler looks to renew an aging fleet, one that has been on the road for many years and is responsible for moving 80% of the country’s freight.

DTNA hopes to move Mexico’s aging fleet from the current Euro 2 emissions engine to Euro 5, which would greatly lessen the country’s emissions.

The availability of low-sulfur, cleaner fuel is also key to upgrading Mexico’s fleet and the use of Euro 5 and 6 engines.