EDMONTON, Alta. – With the help of Mack Trucks, Westcan Bulk Transport is putting the focus back on the driver.

“We need a good product so we can get drivers in the trucks and product to market,” said Howard August, vice-president of Canadian operations for RTL-Westcan Group of Companies, during Mack’s Canada Tough event in Edmonton Oct. 10.

August was referring to Mack’s new highway offering, the Anthem, a truck Westcan has invested heavily in moving forward.

But as Mike Royer, vice-president of fleet service for Westcan, explained, the carrier did not always have the best relationship with Mack Trucks.

Up until 2009, Westcan did not use Mack trucks in its fleet, and hadn’t for some time, but that soon changed. Royer said they always liked the trucks Mack produced, as the vehicles were sturdy and stood up to the elements in Western Canada.

With more than 700 power units in their fleet, investing the in Mack’s Anthem was a big step.

Ultimately, Westcan looked at several factors when deciding to go with the Anthem.

“Mack came to the table with a tractor that truly delivers on the regular feedback our professional drivers and we have provided them regarding what we want to see in a fleet tractor,” said Royer.

Some of those recommendations included driver safety, with Mack offering Bendix Wingman Fusion, as well as enhanced lighting and vision from the cab.

Driver comfort was another area of importance for Westcan, and the Anthem offered a quiet, comfortable ride with ample space and storage for operators.

Royer also said the Anthem was the truck that provided the best reliability in harsh Canadian operating conditions.

Mack’s dealer network, which includes 15 Mack Certified Uptime Centers in Canada, also equated to an efficient cost-of-ownership for Westcan, and kept its technicians engaged and challenged with ongoing factory training.

Part of Westcan’s effort to place more of an emphasis on drivers is through a recruitment video the company produced called #Meant for the Road.

Through the video, Westcan addresses the misconception of drivers being disconnected from their work and families, highlights them as ambassadors of the road, positions its drivers as elite, trustworthy, and skilled role models, shows respect for drivers, and showcases a day in the life of a driver in a Mack Anthem.

In addition to the video, Westcan has made valiant efforts toward driver recruitment, retention, and image, including helping them look and feel more professional by wearing a uniform.

In addition to over 700 tractors, Westcan has 1,947 specialized trailers, primarily hauling liquid bulk products like petroleum, sulfur, acid, chemicals, as well as coal and lime, and asphalt.

“Our drivers have to be very well trained across a wide variety of products,” said Royer. 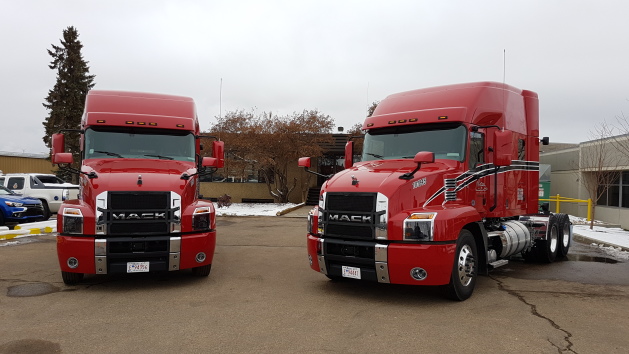 Stu Russoli, highway product manager for Mack, said increased uptime in Mack trucks using what he called “Mack Connect,” helps ensure drivers like those with Westcan get their product to customers safety and efficiently.

Mack Connect is made up of three subcategories: connected driving, connected business, and connected support.

Finally, there is connected support, which is Mack’s strategy to increase uptime with GuardDog Connect, OneCall, Asist, Certified Uptime Centers, and Over the Air solutions for direct communication with the customer.

Russoli said ease of access to controls and driver comfort also helps make the Anthem a driver-focused option for fleets.

“Up here in Canada, if you’re going long stretches, you need to be as comfortable as possible,” Russoli said, pointing to gauge and control placement as a big part of that effort. “The key is having everything right beside you so the driver is not reaching around.”

“Canada is obviously a very important market for Mack Trucks,” said Randall, adding that at present, business is booming. “Things are hot right now. Order intake is extremely strong…including in Canada, and we don’t see an end in sight.”

Randall said Canada’s exports grew 12.3% in the second quarter of 2018, with strong Canadian truck orders and an industry backlog as of August of more than 30,000 trucks.

With economic growth in Canada expected to be 2% in 2019, Randall doesn’t see the demand for trucks like Mack’s Anthem diminishing any time soon.

This is especially true when comparing Canada and the U.S.’s industry segment size in the truck market, with long haul making up 49.8% of Class 8 vehicle registrations in Canada, and the U.S. not far behind at 45.1%.

“We do expect regional haul will start to take a bigger chunk,” said Randall, adding that on-highway will continue to drive growth in the industry. “I can’t say it enough, it’s good times. We don’t see a lot of speculation in there…and don’t expect any cliff or bubble.”

Currently, Mack trucks make up 80% of Westcan’s fleet, and during a tour of the company’s Edmonton location, a group of editors from Canada and the U.S. were given a firsthand look at some new Anthems that had just arrived on site.

Several of Westcan’s older Mack trucks – those from the 2011-12 timeframe – were being retired to make room for the new models.

Westcan has been in business for more than 50 years, at first primarily a western-based carrier before expanding in 2014 into Ontario, opening a location in Toronto.

The company now has 16 locations across Alberta, B.C., Saskatchewan, N.W.T., and Ontario, with its headquarters in Edmonton and 24-hour dispatch in Saskatoon, Lloydminster, Coquitlam, Yellowknife, Toronto and Edmonton.

Following the release of the #Meant for the Road video, there had been over 64,000 views during the first 30 days, something the company says shows the message is getting across.

“We put our trucks through everything you can imagine,” said August, “and Mack has always been there for us.”