CALGARY, Alta. – Despite chilly temperatures, the Alberta Truck Convoy for Special Olympics rolled on Sept. 22 in Calgary, with 75 trucks taking part and raising $25,000.

Lyle Rosenau, who is retired but helps out with the yearly event, said Rosenau Transport hosts the convoy for a multitude of reasons.

“We have a big enough yard to hold all the trucks that participate,” he said. “It is important because if they don’t have to rent a facility or space to host the event that means more money that is raised goes to the Special Olympics. I myself enjoy participating every year as well.”

“Everyone who participated had a positive attitude and enjoyed themselves even though it was cold and rainy,” said Lyle. “It gives drivers a chance to socialize with each other and hear some stories from the Special Olympics’ athletes and their accomplishments. Special Olympics athletes really enjoy it as well because they get a chance to ride in one of the big rigs.”

Following the convoy, Rosenau holds a barbecue with live entertainment and a children’s activity center.

During the celebration, awards were handed out to some participants, including Calvin Barclay of Convoy Supply for the Special Olympics Alberta Athlete’s Choice Award; John Robinson of Westcan Bulk for being the highest fundraiser; and Tri-Line Carriers received the Highest Participation by a Company Award.

The event is a collaboration between the trucking community and law enforcement, with this marking the 17th year for the convoy. Since 2001, more than 15,000 trucks have traveled over 8,000km to help raise funds for Special Olympics.

Trucks that participate pay a $100 registration fee and receive breakfast, a barbecue lunch, T-shirt, and travel mug. Drivers who also raise more than $500 get a truck convoy pocket knife, or a cooler for raising over $1,000.
Lyle said this year’s event also included a truck pull. 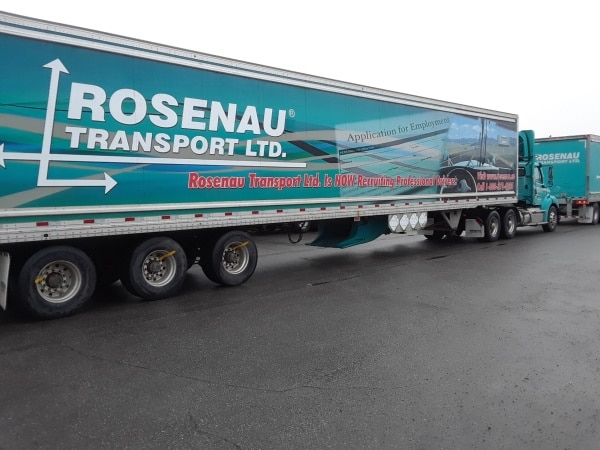