NASHVILLE, Tenn. — In the terminal truck world, new models don’t come along often. So it was with much enthusiasm that Capacity introduced at the Technology & Maintenance Council’s spring meetings, its new Sabre design.

The Sabre, thusly named because of its potential to slash operating costs, was designed around total cost of operation, according to Capacity Trucks president Scott Lord. 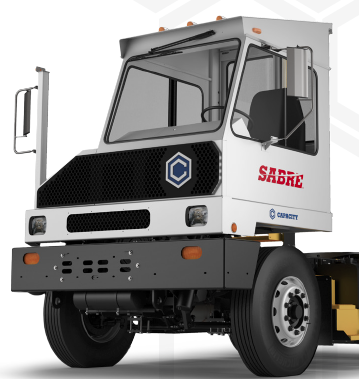 He said the company set out to build a truck that will reduce operating costs without sacrificing the durability and customization its products are known for.

“Those are the two things we didn’t want to give up,” Lord said of durability and customization.

Capacity drew on the expertise of its parent company, Allied Specialty Vehicles, and took an automotive approach to the redesign of the terminal truck. This meant subjecting it to rigorous testing, including studying how the truck is being used in the field and then replicating the harshest conditions it’s subjected to. Capacity found one of the most punishing fleet environments its trucks are currently operating in and then recreated the boom hook in that application and repeated it 96,000 times to mimic a full life-cycle in that environment. This was accompanied by 96,000 door open/close cycles.

“We have tested this like no other,” Lord said.

Capacity also examined its top 30 warranty items and worked to design those problems out of the new truck. It also made the truck more serviceable by providing easier access to frequently serviced components.

The frame of the truck has been reinforced, using military grade 110,000 psi steel, which Lord said is twice as strong as the frame on its previous truck.

Driver comfort was enhanced through tuning of the cab dampening system.

The Sabre will also be better supported, thanks to the creation of a new customer support team set up to address any issues promptly as they arise. The Sabre will replace existing models yet won’t come at a cost premium, Lord noted. The hope is to replace all previous models by June. Some Sabre trucks are already in production and available for order today while other models – such as the air-ride and tandem versions – will come on-stream soon.