INDIANAPOLIS, Ind. — Ford’s new F-650/F-750 medium-duty truck is much quieter than its predecessor, but the company is making some noise with its introduction by showing it in Tonka trim.

The Tonka-inspired F-750 on display this week at the NTEA Work Truck Show will be hitting the road and appearing at other industry events throughout the year, including the mid-America Trucking Show.

The medium-duty truck itself is much quieter than previous versions. Ford claims that at idle, it’s 45% quieter inside the cab and 35% quieter outside. At highway speeds it’s 25% quieter. This is due to a newly designed 6.7-litre V8 Power Stroke diesel engine. 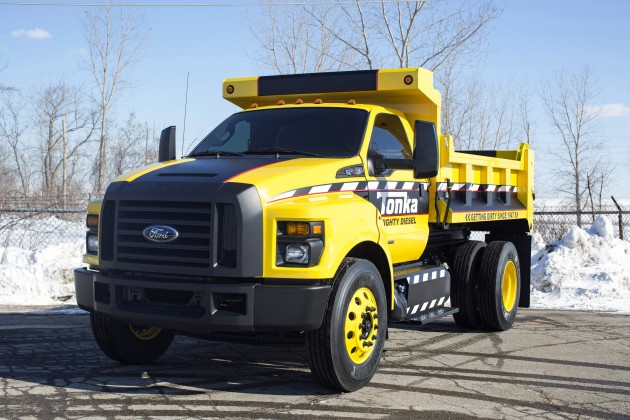 “Our all-new F-650/F-750 medium-duty trucks are purpose-built to give our hardworking vocational customers maximum capability,” said John Ruppert, general manager, Ford Commercial Vehicle Sales and Marketing. “While the truck is able to work harder, we also made life inside the cab easier. Lowering in-cab and exterior noise levels improves driver comfort and minimizes disturbances while idling at work sites.”

The new V8 diesel is mated to Ford’s own transmission, allowing for optimized performance. Ford says it’s the only medium-duty truck maker to produce its own fully integrated engine and transmission.

The truck will be offered in regular cab, super cab and crew cab styles as in straight frame, dock-height and an all-new tractor configuration.

Ford also announced its renaming its telematics solution to Ford Telematics and will be rolling it out globally. It was previously known as Crew Chief. The system will continue to be powered by Telogis. New features and analytics have been added to the platform.

“Commercial trucks have to be more than delivery boxes on wheels, and innovations like Ford Telematics are critical to helping our fleet customers succeed,” said Raj Nair, chief technical officer and group vice-president, global product development with Ford. “Ford, in coordination with Telogis, is leading the development of smart solutions for hardworking fleets so they can maximize their operations to better serve their customers.”

Ford is the only manufacturer to offer a full line of Classes 1 through 7 commercial vehicles. Ruppert said it commanded 43.2% of this segment’s market share in 2014. He also said the new Ford Transit full-sized commercial van has been well received, with 23,000 units sold over the last three months. And the redesigned F-150 with aluminum body has come out of the gate strong. Ruppert said more than 1.5 million prospective customers have used the build-and-price feature on the company’s Web site, setting a new record and attracting more interest than even the Mustang.