LAS VEGAS, Nev. – To build an electric Class 8 truck requires the same battery power as 32 electric Smart cars, but Daimler Trucks North America is forging ahead with an all-electric eCascadia, as well as an electric eM2 medium-duty truck.

The first of these smaller units was delivered to Penske before Christmas, and was the first of 30 electric trucks Daimler will deploy in the coming months. Dr. Andreas Juretzka, head of Daimler’s electric mobility group, said the truck maker is pursuing a “co-creation” strategy with customers, working alongside them to develop the electric models.

As part of this effort, the company established an electric vehicle council in October, consisting of a variety of carriers.

The first of these electric trucks were made available to the trucking press to drive for the first time this week ahead of the Consumer Electronics Show. While drives were limited to a 1.3-mile track, the trucks were extremely quiet and the torque was impressive. In fact, it was difficult to tell if the trucks were even keyed on, as they were completely silent at idle.

Penske and NFI are the carriers who will operate, in their real-world operations, the first Freightliner electric trucks. Daimler plans to commercialize the trucks in 2021. While the company is building a Class 8 eCascadia, Juretzka said “the medium-duty area is probably more fruitful for e-mobility than Class 8 at this point in time.”

While an electric truck requires plenty of heavy batteries, it also is ridded of the engine, aftertreatment, and diesel tanks. But this means accessories normally driven by belt must now be powered by an electric motor, Juretzka noted.

“So, the HVAC and air compressor must now have an electric component to it,” he said. “We tried to figure out how many different cooling systems do we need? There’s a lot of piping that goes on and cooling every little part of the truck differently.”

Batteries work best at room temperature, Juretzka explained, so in hot weather they’ll need to be cooled and in extreme cold, heated. So far, Freightliner has achieved a range of 230 miles for the eM2 and 250 miles for the eCascadia. They can be charged to 80% of their power within 60 minutes for the eM2 and 90 minutes for the eCascadia. Juretzka said traditionally Class 8 trucks would ideally run 500 miles in a driving shift but that it’s not yet realistic to add the batteries needed to meet that range.

“Will there be a time when we go higher? I’d say yes, but at this point in time that’s not economically practical,” he said.

Still, 20 of the 30 trucks in the Freightliner innovation fleet will be eCascadias.

Another challenge is determining what the total cost of ownership will be for fleets. What will their resale value be? Who will perform maintenance on the vehicles? And will charging infrastructure be widely available? These are some of the questions Daimler is aiming to answer along with its fleet customers through its co-creation approach.

It must also develop a strategy to dispose of the batteries, or find a suitable second life for them. Juretzka noted the batteries are no longer useful for transportation applications once they’ve reached 70-80% of their capacity, so there is still plenty of life left in those batteries if they can be repurposed.

Where the trucks are deployed is also important, and may mean adoption rates in Canada will be slower than stateside. Turning the heater on, for instance, can reduce range from 180 miles to 120 miles, Juretzka said.

“If you say, ‘Give me some trucks in Alaska,’ I will say ‘Can do, but range will suffer’,” he explained. “You have to make a decision: Do I make it home or keep my cab warm?” 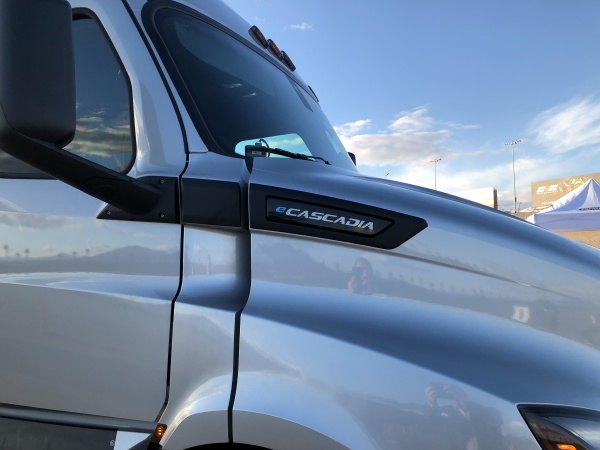