COLORADO SPRINGS, Col. — Freightliner has completely redesigned its top-selling truck with the introduction of the 2018 Cascadia.

The company showed the new Cascadia – as it has officially been dubbed – for the first time to customers, dealers and truck press at a special event here this week. Twelve carriers, including Bison Transport, that have collectively spent US$9 billion on some 60,000 Freightliner Cascadias over the last six years were the first to receive the new model.

“You don’t spend $9 billion on a good vibe,” said Martin Daum, president and CEO of Daimler Trucks North America. “What sells a truck is to have the absolute best product in the market.”

Freightliner wasn’t content to have the top-selling Class 8 truck in its stable; it set out to improve fuel economy by 5% compared to the Cascadia Evolution. A real-world coast-to-coast trip from Detroit to Portland yielded an 8% fuel economy advantage for the new Cascadia, exceeding the company’s own expectations.

Freightliner will continue to offer the current Cascadia and the Cascadia Evolution, giving customers a choice from a range of on-highway trucks that span a fuel economy breadth of 19%. This marks the most expansive line of on-highway tractors in Freightliner’s history, noted Richard Howard, vice-president of sales and marketing. He acknowledged the Cascadia helped DTNA grow its Class 8 market share from 34.5% in 2007 when it was launched to 42.6% through July of this year.

“Starting with the best truck is the best place to start,” he said of the redesigned Cascadia, noting nearly everything inside and outside the truck has been changed.

The engine has been lowered thanks to a splayed frame rail, which also offers better access to underhood components. The lower seating of the engine allows for a rounder front end of the truck, which differentiates the new Cascadia, giving it a more modern – but not radically so – look. The new Cascadia is available in Professional and Elite trim and with optional Aero and AeroX aerodynamic packages. Every truck will come loaded with Detroit Connect telematics and will be constantly connected, Howard explained.

“The biggest mobile device on the road will be the new Freightliner Cascadia,” he said. Detroit is upgrading its telematics with the launch of a new portal that will allow customers to manage Virtual Technician remote diagnostics and monitor key data points. For example they’ll be able to easily identify performance outliers within the fleet and investigate poor performing trucks. 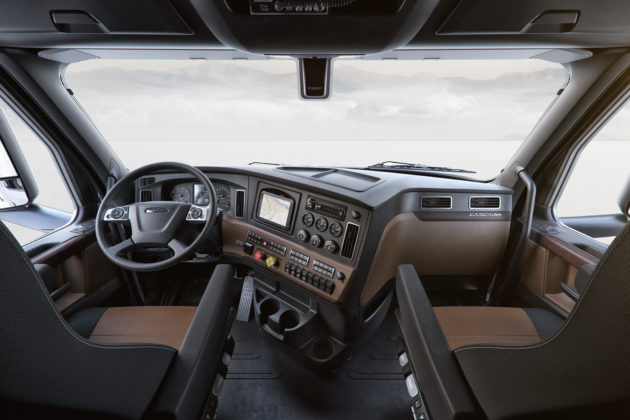 Virtual Technician will be offered for five years on the new Cascadia with no subscription fees. Customers will also be able to receive remote engine updates and will be able to select a new Detroit Analytics service that aims to convert data from the fleet into meaningful information.

The interior has been completely redesigned. Kary Schaefer, general manager, product marketing and strategy, said Freightliner worked closely with interior design firm Teague, which specializes in designing small spaces and has done such work with Boeing. LED lighting is standard on the interior and exterior of the new Cascadia and dimmer switches allow drivers to adjust the bunk lighting.

Two seats and a table provide a comfortable workspace or dining area but they fold away to allow a Murphy bed to be deployed in about six seconds. In single bunk sleepers, drivers enjoy a redesigned “loft” area with ample upper storage and larger areas for clothing, TV, microwave and refrigerator.

“Driver turnover and wages are a big part of fleet costs,” said Schaefer. “We wanted to develop a truck that drivers are proud to drive. We want to think of it as a tool for attracting and retaining new drivers for fleets.”

The sleeper is also configurable for team drivers. A new telescoping ladder allows safer and easier access to the top bunk and folds neatly away when not in use.

The new driver display is extremely vibrant, and uses bright colors to communicate important messages to the driver. Fault code information is presented in plain English (or French, or Spanish) instead of by code. Also new is a fully adjustable steering column.

“We spent a lot of time on the dash layout trying to understand where the placement of switches and gauges need to be for different heights and sizes of drivers,” Schaefer noted.

A third door seal has been added to reduce noise and a redesigned suspension offers a smoother ride. A new thinsultate insulation package is also now available. The AeroX package offers a full set of low-to-the-ground fairings, which would appear at first glance to be impractical in a Canadian winter. But officials said the low front air dam was tested extensively in a Minnesota winter and it was able to snap back into place undamaged after making contact with snow and ice. The truck can be ordered without the low air dam but it contributes up to a 1% improvement in fuel economy. 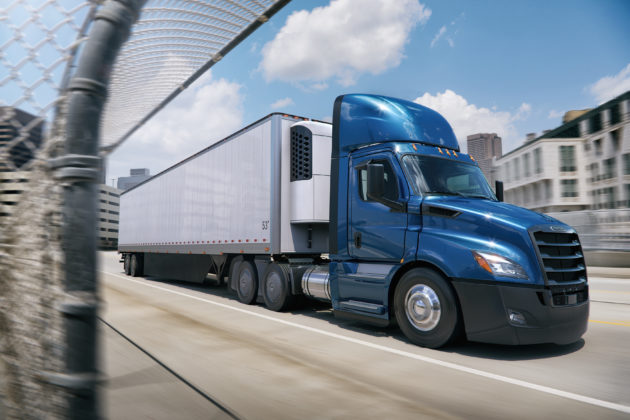 The new Cascadia will be available with Detroit Assurance 4.0, an updated collision mitigation system that will now be able to identify pedestrians and apply partial braking. The radar range has been extended by 50 meters.

The truck was also built for easier serviceability. The input of technicians was sought and applied to the design, according to Toby Faulkner, program leader for the new Cascadia. Some of the design attributes that were based on technician feedback include a two-piece, easy to remove front bumper that can be removed in two minutes. All electronic control units (ECUs) are now housed together in an easy to access electronics vault accessible from inside the cab. The HVAC is also easier to access through a panel on the top of the dash.

The new Cascadia will enter production in early 2017 with production ramping up in the second quarter. It will cost approximately US$15,000 more than today’s Cascadia basic model, depending, of course, on how it is spec’d. But even with the upcharge, an 8% fuel economy improvement is something many fleets will find difficult to ignore. And the gap could widen. Schaefer said the truck was built with the potential to add further fuel economy improvements every couple years.