BLAINVILLE, Que. — More than 100 people packed a party tent and spilled out into the sunshine this June 7, as lunch was served at a show and tell hosted by PIT Group at Transport Canada’s Motor Vehicle Test and Research Center (MVTC) in Blainville, north of Montreal.

The MVTC, run by PMG Technologies, includes a 6.4-kilometre high-speed track, on which PIT has been testing the potential of fuel savings technologies and methods since 2007. 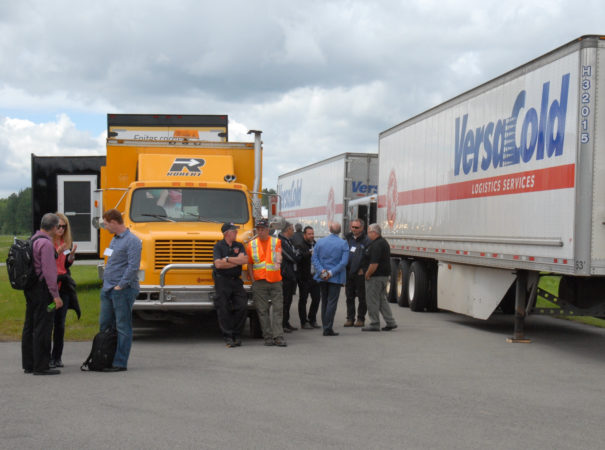 Those first trials, dubbed Energotest 2007, represented a historic collaboration of suppliers, fleets, federal and Quebec government agencies and the FPInnovations Feric division. Their goal was to bring more discipline to fuel savings research outside the laboratory and help fleets make better purchasing decisions.

Since then, PIT has run 18 test campaigns and reports having tested 275 technologies and best practices; ie., side skirts and trailer tails, whether idling in the winter is better than shutting down the engine, drivers’ braking styles, in-cab cameras and tire pressure management systems.

The morning agenda began with a video and presentation by PIT group manager Yves Provencher that reviewed the history and purpose of PIT. One of its bottom-line tasks is to feed test results exclusively to its 50 or so member fleets. And by paying to have PIT test their products, vendors can gain legitimacy in the eyes of fleet managers.

Attendees then hopped on busses, which took them to the test track infield, where Energotest trials were underway. There, trailers owned by companies such as SLH, Robert and FedEx were parked, awaiting testing action. Two VersaCold Logistics Services trailers were backed up on either end of a data collection trailer, undergoing an eight-hour test of where cold is being lost. PIT was also tasked with learning more about the efficiency of new versus older reefer trailers.

PIT technicians hustled around, unloading and weighing fuel tanks from tractors, and otherwise attending to their busy schedules. PIT also had one of its jewels, a half-million-dollar towing dyno, on display. This ordinary looking trailer, which is not at all ordinary, can simulate pulling as many as 125,000 kilograms up hills of different steepness. Technicians using it can, for example, compare the fuel consumption and performance of a 455hp versus a 4525hp engine, as part of determining how much horsepower is required to do a specific route. With test data like this, fleets can make more informed decisions on which units are best spec’d for the various routes they run.

Vendors coming to PIT have products in various stages of development. Some are looking for their first test results. Others are already well-established, but seek additional results. 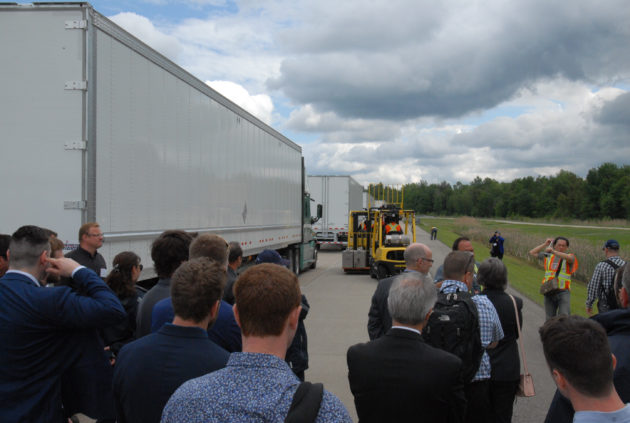 Viscon is already approved by prestige bodies like the California Air Resources Board and US Environmental Protection Agency, and under the Texas Low Emission Diesel program, major refineries have treated some 25 billion litres of diesel with Viscon.

Looking to add a Canadian testing agency to its credentials, gii group signed on to have X1-R Lean Fuel Burn with Viscon tested this spring in Société des alcools du Québec trucks in both city and test track conditions, according to gii group president Ryan March.

Fleet Engineers, a company based in Muskegon, Mich., was another of the vendors at the event, to have PIT test its AeroFlap mudflaps. The company hired PIT to test its perforated mudflaps at the request of a customer.

Other people who came to the VIP day represented both Canadian and US fleets; although PIT was created to do testing for Canadian fleets, it has been working to increase its presence in the US market; US carriers at the event included Keller Logistics, Skyline, CR England and Schneider.

Transport Canada representatives also visited, as did staff from the National Research Council Canada. For the NRC’s Dr. Michel Dumoulin, general manger Engineering, Automotive and Surface, it was his first visit to a PIT Energotest. He explained that he was interested in how NRC and PIT might be able to collaborate, share resources and expenses.

The afternoon was taken up with a tour inside the vehicle and product testing facility, and a visit to the Centre de formation du transport routier Saint-Jérôme (one of the big provincial truck training schools).

Asked what the next frontier is for the ambitious PIT Group, Provencher told me, “One of the six US carriers present at the VIP Day has accepted to host an Energotest in the fall. This will be a first great step in our US testing activities.”