The reveal came in advance of World of Concrete and starred a truck that Bill Kozek, president, truck and parts with Navistar, said will return International to the front of the pack in the vocational truck segment.

“The HX will be a catalyst for International to regain leadership in the premium vocational market segment where we historically had led,” Kozek said. “When I came here, one of the first discussions was about how we needed a vehicle like the HX to compete and to win in the construction, heavy-haul and mixer segments again. Today, we see the results of several years of hard work come to life.” 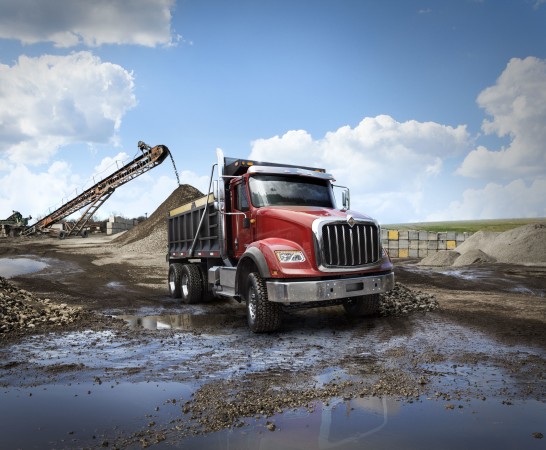 The front end of the new truck is curvier than the PayStar it replaces, and it also boasts a more stylish interior. And it was introduced to customers and dealers in style, too. A newscast cut into the presentation on large TV monitors to break the story of an International truck that had been commandeered by a fleeing Elvis impersonator who had robbed a local casino.

A police chase ensued, and ended in a yard within sight of the Strip, where customers and dealers were gathered. After some stunt driving at the launch site, Elvis was arrested by a heroic cop, who turned out to be none other than Denny Mooney, Navistar’s senior vice-president, global product development.

“Of course we couldn’t pass up introducing our new truck in an over the top way,” Mooney said. “It’s Vegas – they wrote the book on being over the top.”

Three HX trucks were presented for ride-and-drive opportunities. A lap around the short makeshift off-road course revealed a truck that rides well, turns tight and features a high-end, comfortable interior.

“At its core, the HX represents the ultimate in endurance; a truck designed to tackle the most punishing loads and to run long and run hard and to keep the operator comfortable when he’s doing his job,” Mooney explained.

International said the truck was designed around four principle attributes: strength and durability; driver productivity; style; and uptime. The HX Series can trace its roots to a former joint venture between Navistar and Caterpillar. Signs of that former partnership are most prominent in the interior. Soft touch points, snappy, solid rocker switches and a center console that angles toward the driver and provides easy access to controls are among the similarities.

Outside, the truck features stylish halogen headlights with a distinctive LED brow. The hood slopes and tapers in to provide greater forward visibility than the PayStar. A raised sightline down the centre of the hood helps drivers orient themselves. Mooney said the HX offers the best forward visibility in the segment as well as a larger rear window for rearward visibility.

The wheels cut 40 degrees for a tight turning radius.

The truck was also built to be lighter. A three-piece Metton hood is lighter than fiberglass, the cab is aluminum and the 12.5-inch frame rails offer all the strength of double 10-inch frames, but at less overall weight, International claims. The truck also boasts the industry’s strongest tow pin, rated at 150,000 lbs for extreme recoveries. The truck I drove had classic-styled external air cleaners, an option on the longer BBC models.

Mooney said designers were challenged to beat the truck up during the product validation process.

“As part of the product development process and validation testing, the HX series was tested extensively in our labs in Melrose Park, Ill. and our new proving grounds in Indiana,” Mooney said. “We ran accelerated life testing on the shaker – this simulates 10 years of wear and tear of a severe-service truck in extremely difficult duty cycles. We also put it through the most rigorous portions of our proving grounds. The bottom line is, I told our test engineering team to take this truck and punish it. I wanted them to try to break it – after all, we know how our customers use these trucks. When things broke, we redesigned them so they didn’t break and when things came loose, we found ways to make them stronger.”

Nice touches such as LED lighting inside the cab, a tilting, telescoping steering column, air-conditioning, power locks and power windows are all standard. The smooth ride is attributed in part to a new DriverFirst cab air suspension with 52-inch springs. 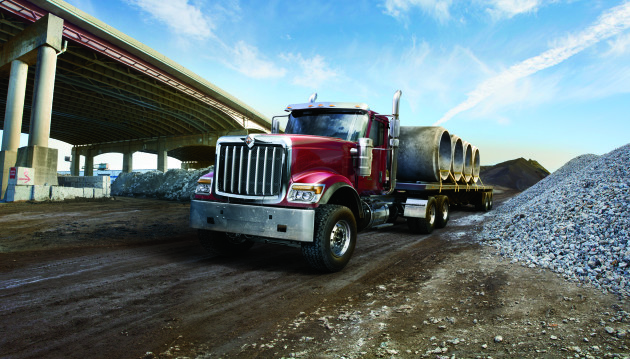 Jeff Sass, senior vice-president with Navistar, said International bucked the trend towards vertical integration, opting instead for an approach he dubbed as “open integration.”
“This is where we work seamlessly with leading component manufacturers and integrate leading technologies into our trucks,” he said.

The launch of the HX seems to have given International Trucks back some of its swagger.

“It has been a few years since we were able to say we had the product able to compete and win in the severe-service market,” Sass said. “With the HX Series, we are now able to complete our offerings in the construction and concrete markets. This will now give International Truck the most comprehensive severe-service lineup in the industry.”

Sass said 132 HX trucks have already been ordered, even though the truck has just now been shown to the public.

“As I reflect on where we are today, I’m incredibly proud of where we are as a company,” he said. “Today we’re building the best trucks we’ve ever built; our quality metrics show it and more importantly, our customers recognize it and believe it.” 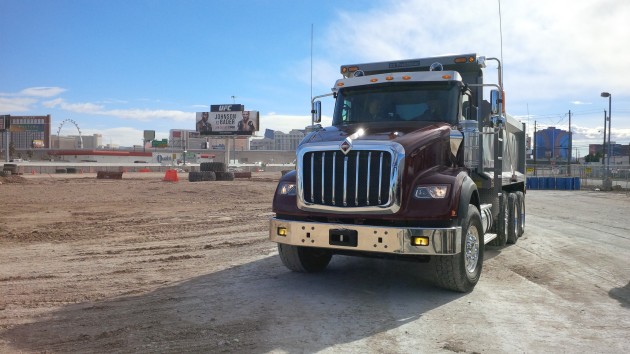