NASHVILLE, Tenn. — Silver Eagle has come out with a converter dolly that automatically telescopes at highway speeds to reduce the gap between trailers.

Testing has shown a fuel savings of 2.5% can be delivered by the new T-Dolly. It also provides “wiggle-free tracking” for better handling and it is compatible with existing equipment, Silver Eagle announced at the Technology & Maintenance Council’s annual spring meeting.

“The only reason to have a large gap between trailers is to make a sharp turn at low speed,” said Gary Gaussoin, president of Silver Eagle. “Just think of how little you turn the steering wheel at highway speeds to change a lane; there is a very small steering angle in those situations.”

The dolly takes its speed readings from the trailer ABS and narrows the trailer gap by 12 inches when speeds of 45 mph are attained.

“From the beginning we were very aware that the T-Dolly had to fit into the fleet like any other dolly, and it had to be fail-safe and return to the normal extended position,” said Kevin Sternes, lead engineer.

UPS has been testing the system on a Portland, Ore.-Everett, Wash. Run.

“The T-Dolly will play an important part in reducing fuel consumption in our fleet,” said Bill Brentar, UPS director of maintenance and engineering for transportation equipment. “UPS drivers who use these dollies preferred the way they feel in the closed position and that they settle down right away when changing lanes.”

Silver Eagle officials said the T-Dolly will cost about US$14,500 – approximately $4,500 more than today’s standard dollies – and will deliver a payback in about 3.5 years. 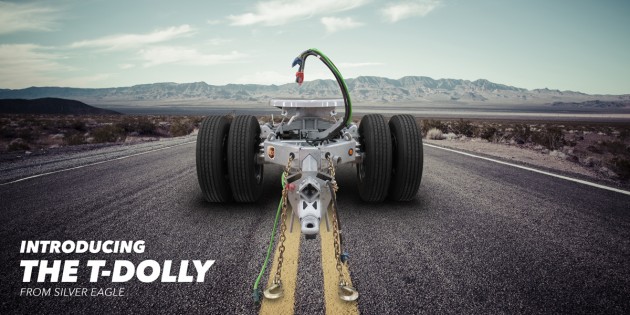