COLUMBUS, Ind. – Trailer orders totaled 31,900 units in October, representing a 71% spike from September, but down 42% year-over-year, according to preliminary data from ACT Research.

It marked the second straight month of sequential growth greater than 70%. Year-to-date orders are off 52% compared to the torrid pace of 2018.

“After a lackluster summer, order volume has now surged for two straight months, and is tracking more in line with historic seasonal order patterns,” said Frank Maly, director, commercial vehicle transportation analysis and research at ACT Research. “October order strength was highly concentrated in dry vans, where orders were more than two times that of September. A counterpoint to the net order surge was continuing elevated cancellations, occurring in both dry vans and reefers. Since we are approaching year-end, it is likely that cancellations are due to a combination of several factors. Some placeholder orders are likely being cleared from the system and it is also likely some production is being shifted into early 2020, either at OEM or fleet request.” 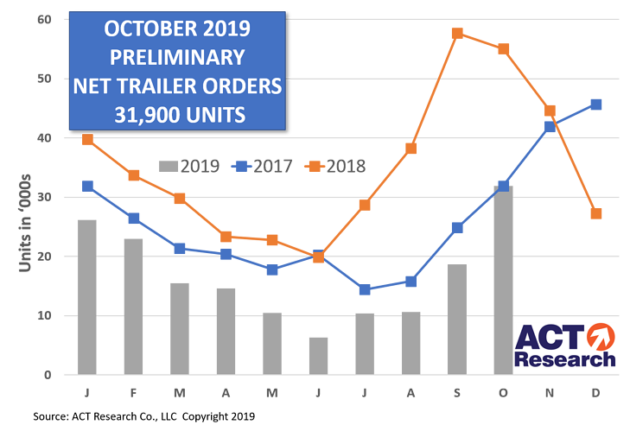