LAS VEGAS, Nev. — The trucking industry today got its first look at the Western Star 5700XE, the truck that inspired Hollywood.

The new aerodynamic highway tractor was used as inspiration for the Optimus Prime character in the popular Transformers movie that debuted this summer. Optimus Prime appeared at industry events and trade shows, attracting large crowds and probably leading many to believe that Western Star took its design cues from Hollywood. In fact, it was the other way around; the design of the 5700 was well underway when Hollywood came calling. So enamoured with the new model were the movie’s producers that they retained much of the 5700’s real-life design when bringing Optimus Prime to life. 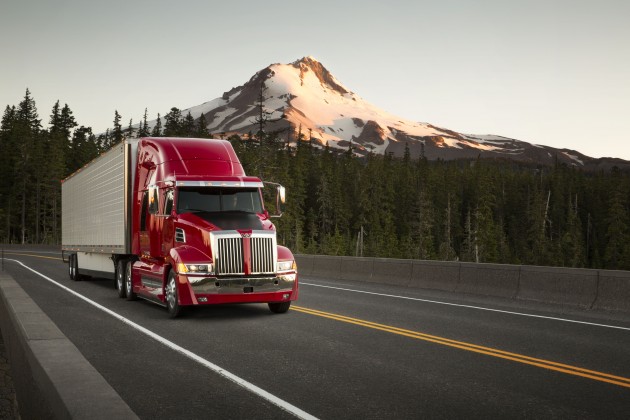 The 5700XE is a gorgeous truck, that retains Western Star’s distinctive look while improving fuel economy by as much as 15% compared to a 4900FE, which was until now the most fuel-efficient vehicle in Western Star’s stable. It looks markedly different than currently available aerodynamic tractors, yet can compete with them head-to-head when to comes to fuel economy. About 7% of the fuel savings come from improved aerodynamics and further gains are possible by spec’ing an integrated Detroit powertrain, including the DD15 engine, DT12 automated manual transmission and Detroit axles with a ratio of 2.41 in a 6×4 configuration.

Mike Jackson, general manager of Western Star, said the time is right to bring out an aerodynamic highway model, since even the most traditional-minded customers are indicating they plan to purchase more fuel-efficient trucks. The ‘full-aero’ segment makes up some 65% of the Class 8 tractor market and Western Star realized it needed to play in that sandbox if it was to gain share.

“Image is still important but at the end of the day, customers are saying ‘I’m here to make money.’ We looked at those trends and we’re here today to step into that market for the first time,” Jackson said. “With us having been a traditional model and having a partial-aero model, we were clearly self-imposing some limitations on our growth opportunities. We recognized that, and that’s when we went to the drawing board.”

The 5700 has been in development since 2009, in recent years running under disguise near Portland, where the truck has accumulated some 2.5 million customer equivalent durability miles. While sales of aerodynamically-designed highway tractors have been brisk over the past couple years, Jackson said those sales have mostly been driven by large fleets and leasing companies, which aren’t the target market for the 5700. 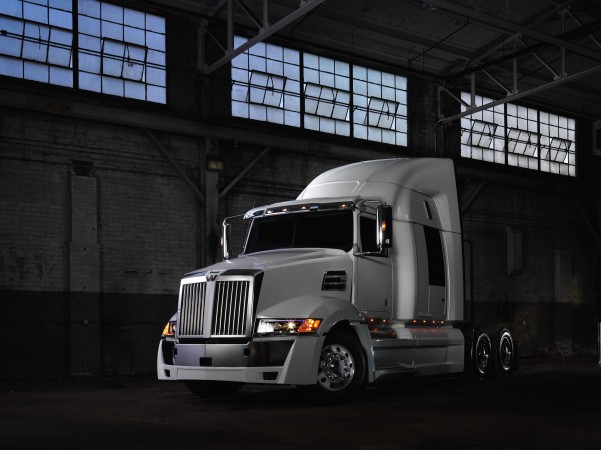 “Now it’s time for those smaller companies, the owner/operators, those that need a badge and image type purchase as well as the ability to make money, those are the guys stepping up and getting back in the game after being on the sidelines for a while,” Jackson said.

Ann Demitruk, director of marketing for Western Star, said the 5700 is aimed not at the large fleets and leasing companies, or those customers concerned mostly with acquisition cost, but at the owner/operators and small- to medium-sized fleets looking to differentiate themselves. But of course the large fleets won’t be turned away, and Demitruk said the 5700 makes a great reward truck for those larger trucking companies who want to give their top-performing drivers something special to drive.

As well, Demitruk said Western Star will be looking to get the 5700 into fleets that operate primarily Freightliner trucks with Detroit powertrains, where it could potentially displace the secondary brand within the fleet.

The 5700 features the same steel cab used on its existing models, but it’s surprisingly lightweight. The day cab weighs just 15,300 lbs without fuel, and a 5700 with a 68-inch sleeper weighs just 17,500 lbs – and that’s with disc brakes.

Don Vena, senior designer of the 5700, said there was no temptation to slap a Western Star badge on the front of a repurposed Cascadia, despite that model’s sales success.

“First and foremost, we wanted to maintain the iconic look of this vehicle,” he said. “Western Star has always been unique and we never wanted to deviate from that in any way, shape or form.”

Certain signatures from Western Star’s past were retained, including the rectangular headlights and the ‘mohawk’-style raised section that runs down the middle of the hood. This characteristic was actually extended down the center of the grille, giving the 5700 an even bolder look. 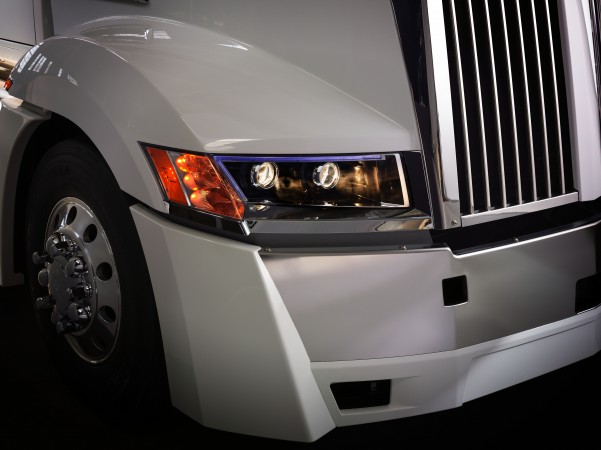 “We still have that signature bump, but now it’s on the face of the truck,” Vena explained.

And while Western Star keeps its rectangular headlights, their performance has been improved by moving to a projector beam design. They look sharper too, thanks to an LED outline around the top and left edges.

The grille features vertical stainless steel bars, which gives it a recognizable face. An aggressive bumper with end caps on both sides gives the truck improved aerodynamics. The end caps on the bumper were among the most controversial design elements but Vena said they were absolutely necessary to divert air away from the wheels. They were styled in such a way to add to the design rather than to detract from it; engineers refer to these sections as ‘fangs.’

Western Stars have always had a steep windshield, which posed some design challenges, however this was retained and a combination of a kick panel on the hood, just before the windshield, and a drag-neutral sun visor improve the way air flows over top the vehicle.

The 5700XE is “comparable” in fuel economy to the Freightliner Cascadia Evolution, Jackson said, without sharing any hard numbers. It’s fuel-efficient enough to fit within the EPA’s bin of the industry’s most fuel-efficient Class 8 vehicles under its greenhouse gas emissions program.

The 5700XE is a truck that Western Star could not have made without its belonging to the Daimler family. Even the redesigned steering wheel, with controls placed at the driver’s fingertips, seems to borrow from the European Mercedes Actros. However, it’s still pure Western Star, with a faux wood finish inside and a panel in front of the passenger seat, which provides easy access to fuses, making the truck easy to service.

The new model can be had with the DD13, DD15 or DD16 engines – no Cummins power will be offered – and as far as transmissions go, you can get an Eaton manual but the DT12 will be the only automated transmission on offer.

Brad Williamson, manager of powertrain marketing with Daimler Trucks North America, said customers will maximize their efficiency by sticking with a purely Detroit powertrain. A DD15 rated at 400 hp/1,760 lb.-ft., with the Detroit DT12 transmission and Detroit axles with a 2.41 ratio will be about 5.2% more fuel-efficient than the same baseline truck spec’d with the DD15 TC with 455 hp/1,550 lb.-ft. and a 10-speed manual transmission, Williamson said.

Some of the improvements built into the new DD15 include an asymmetric turbocharger with fewer moving parts, a new amplified common rail fuel system that builds pressure up to 38,000 psi for better atomization of fuel, and a variable speed water pump that results in less parasitic losses than its predecessors.

At the launch of the 5700, the enthusiasm about the new model among Western Star people was palpable. The truck will enter full production next April and will ramp up over the summer. It will be built in Daimler’s Cleveland, N.C. plant. Demitruk said she expects Western Star’s dealer network to benefit from the new model.

“Western star’s historical opportunity was only 30% of the market,” she said. “The 5700 will further strengthen our dealer network and brand.”

After showing the new truck off to industry journalists, Western Star was planning to bring in dealers and to get them up to speed on how to sell and service the new truck. For more pictures, check out the photo gallery below: