Eassons Transport is one of the many trucking companies in Canada that has been passed down from generation to generation. But it’s not just a family business to Paul Easson, second-generation Easson and current president of the company.

Eassons was first started in 1945 in Kentville, N.S. by William Easson (Paul’s father) who would haul apples from the province’s Annapolis Valley to local markets. Shortly thereafter, his brother Phillip joined the venture. It was a two-truck business back then, with two brothers holding down the fort.

“We deal with the retailers, producers and distributors,” said Paul, who joined the family company back in 1984. “Farm to fork, as they say.” 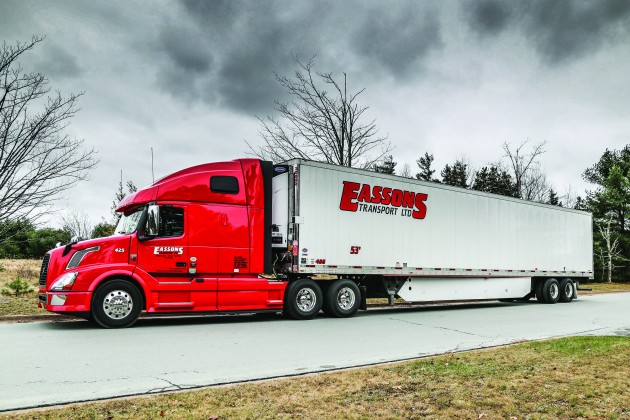 Eassons has acquired several companies over the years and has grown from two trucks to 325. To date, it employs 350 drivers, but the company is still very much in the hands of the Easson clan. Paul’s two brothers, Peter and Tom, are still involved with the business. Peter, who joined the company in 1987, is the company’s current vice-president of sales and Tom, who joined in 1976, is the vice-president of maintenance and equipment. As with many trucking companies, the business has been passed down to the third generation. Brian Easson is the company’s current controller and William Easson is the terminal manager.

But to Paul Easson, having the same last name that’s on the side of the truck and the front of the terminal building, really means nothing.

One of the non-family members who Easson said is integral to the business is current HR and risk manager, Trevor Bent.

Bent joined the Eassons team six years ago and says he is still learning the ropes, while Easson says the company is actually learning from him.

“He’s teaching us all kinds of things,” said Easson. One of which is how to better communicate throughout the national company.

To mend the issue, the company, with the help of Bent, launched a monthly business update video that feeds into each of the terminals’ television sets.

“This way, the video gets watched by all staff and every driver, so they know what’s really going on in the company,” Bent said. “And it allows the drivers to feel closer to the company. Our communication from management to drivers has really improved.”

Because of the third-generation Eassons (and Bent), the company’s management team is relatively young, and the trend towards youth is moving out of the office and onto the roads for the company.

“I think if you looked at the average age in the industry, you’d find the average age of our employees and drivers is probably six or seven years younger than the norm,” Easson said. “I think the biggest thing we do that contributes towards that – because drivers are the biggest portion of our employees – is that we’ve had alliances with driver training schools for 20-plus years. We take a lot of people out of the schools.”

The company selects driving students from a recognized school to first work with one its driver trainers, and then the trainer decides if the student is worthy of working for the company.

“We’ve been doing that for 15-20 years. And that’s brought more young people into our fleet,” Easson said.

More recently, the company has partnered with the Commercial Safety College in Truro, N.S. to provide a corporate driving program. This program launched in January and shows Eassons’ commitment to engaging youth into the aging industry, said Easson.

The company’s focus on safety extends even further, though. The company offers an online ongoing training program to its employees, and employs several driver trainers (whom they call assessors), who monitor and invest time in driver development.

“It’s important to keep our safety programs going and to get young people into the business because it’s a tough job,” said Easson of driving. “And everyone knows this – it’s old news that the demographics in general is old – it’s important to every business out there to replenish those old hands and old grey-haired guys.”

Not only is the Eassons driver base young, it’s sticking around. Bent says the turnover rate for company drivers is 25% right now. This number is thanks to recent changes the company has developed for employees, and the processes the company executes on a daily basis.

The company recently shortened the eligibility time for RSP contributios for employees to six months, and has re-jigged the benefits plan to make them better. They also offer dedicated runs, good equipment for drivers and a multitude of incentives.

Easson added that unlike other companies with similar incentive programs, Eassons likes to take a different approach.

“The difference between our organization and others is, instead of taking a specific event and rewarding people on that event, we’ve got an integrated scoring system and you get incentives based on being good at several things instead of just one. Being good at one thing won’t get you much here.”

The scoring system measures everything a driver does, says Bent, like their administration and paperwork, their idle time, speed, preventable incidents, scheduled maintenance, and all their training.

Another reason drivers are sticking around is the technology the company has invested in, said Bent.

“The social consciousness of being environmentally aware is important to us as a company,” he said. “It’s one of our values. So we’ve invested in everything possible (for fuel savings) so far and we’ve seen a major improvement in reducing our carbon footprint.”

The company has invested in tails and skirts and all its vehicles are speed-controlled.

“We measure our fuel economy, and watch it like a hawk,” he added. “It’s probably one of our biggest challenges and our biggest strengths. Fuel economy has been a strength for us, but it will continue to be a challenge as we try to find more ways to save on fuel. It’s the biggest expense we’ve got. And I think it helps with retention for sure. We do a lot of awareness internally. That is something that we do get asked and you hear it discussed more and more and it’s something we can hang our hat on. We have the right practices in place.”

It’s clear that Eassons is on the road to (even more) success, and according to its president, it’s actively looking to expand the business even further both organically and through future acquisitions.

“You always have to provide something the customer wants and it has to be price-competitive and if that means changing the mode of your business from trucking to trucking and warehousing or whatever, you have to be flexible to provide that cost-effective service in the end,” Easson said. “We’re not naïve to think we can move product up and down the road like we do now forever. We know we have to keep changing to be successful. And for people who do that, the future is bright I think.”