KELOWNA, B.C. – Finished with school after Grade 8 with nothing more than a passion for truck driving in her soul, Kelly Ficociello’s journey to MAK Transportation Services was far from easy.

Hitting the open road with her father until she was 19 and finally able to get her own Class 1 licence, it was driving that first got Ficociello excited about the industry, but being a woman, there were speed bumps along the way. 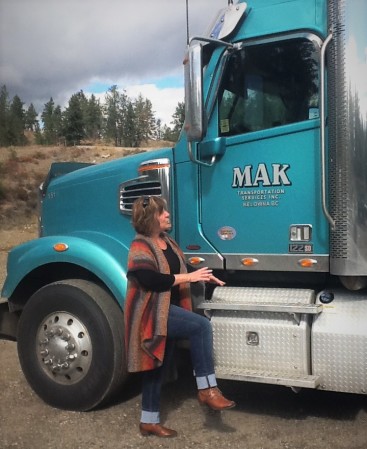 “I got my licence and no one would hire me,” Ficociello said. “Back then it was very hard to get a job as a woman, so I ended up having to buy a truck off my dad and then I got lots of work.”

For the next five to six years, Ficociello did runs to the south, mostly to California and Texas, before realizing she was missing a lot of important experiences that life offers a young woman her age.

“That’s all I knew all my life,” Ficociello said of driving, “and I was making damn good money as a young woman, but I had no life.”

She decided to sell her truck and start getting working on securing the freight loads for a trucking company.

“At that age and being a woman, I got paid way less,” she said, compared to what men in her position were pocketing. “But you didn’t say anything, because I wanted to stay in the industry, and if you started that back then, I wouldn’t be where I am today.”

Ficociello said she worked 24/7 in an effort to prove herself to the industry and the men who dominated it.

“I got my first raise in the industry by putting my high heels on the boss’ desk, and there were holes in my soles and I said, ‘I can’t even afford to fix these,’” she said. “In those days, you walked the pavement, you beat on doors to get your freight.”

It was soon after that Ficociello was involved in an accident that forced her into therapy to learn how to walk again, and she said her boss at the time questioned what good she would be to the company in such a precarious state.

“I knew I had a nice set of legs, but that’s not what was getting me the freight,” Ficociello said, now able to joke about such a situation.

Then, after quitting and borrowing $20,000 from a friend, she opened MAK Transportation in 1994.

“I started brokering freight,” she explained of the early years of MAK. “I was still learning the physio and stuff like that. Then my customers started telling me, ‘Please, Kelly, get your own trucks, we’ll follow you.’ And I’ve had customers for over 30 years who are still hanging with me who are my best sales forces because they are always recommending us.”

MAK Transportation is a heavy-haul carrier, moving over-dimensional and over-sized heavy items, like bulldozers, excavators and power units, covering Canada and the US.

MAK does not maintain a large fleet – just six to seven trucks total, with various axle configurations and specialized trailers – mainly because Ficociello said she finds it difficult to find people who suit what her company does.

After starting MAK, things still weren’t easy from that point, a lesson Ficociello quickly learned talking to a male peer about how to tear down a machine in order to haul it while not being certain about what components that item included.

After receiving a derogatory comment from the man on the other end of the phone, Ficociello said she got it, and even agreed with him.

“It was a slap on my ego and I went and told my boyfriend and he said, ‘You need to know this game more than they know it, and then you’ll earn your respect.’

Now 57 years old, Ficociello said she thought things were different in the industry now, but continues to run into other women who went through a similar experience as she.

“You guys wrote the book, and I respect that,” she said. “I had to read it twice. I don’t have a problem and I respect you guys…this is a man’s world in what we do, but if I can learn it as well as you do, it’s no different and I deserve the same pay.”

Ficociello said she knows a lot of companies that have no problem hiring women, but more to work in the office with a $15/hour wage; “And those women work their little hearts out.”

She said despite what some people say, including the media, there is nothing that indicates the wage issue is getting any better in her industry.

Ficociello did get paid on the same level as men when she was driving a truck, but on the other side where they get the freight, load trucks and buy permits, she said there are still not enough women ‘pounding the pavement.’

“Now, after all these years,” she said, “I have men calling me asking how to tear down that (machine).”

Ficociello is not sure if today’s generation has the same drive and attitude as she did growing up, and even said the B.C. Trucking Association offers courses on ‘how to deal with the next generation.’

“That scares the hell out of me,” she said. “It’s getting harder and harder to deal with a lot of people now because no one wants to work, and in trucking, you’re working all the time…you’re phone rings at 3 a.m. and you need to deal with it.”

When Ficociello started as a driver, she said when most young girls were looking to have some fun on a Friday night, she was working hard to secure loads to ensure she made money.

“Most girls my age back then and still now, they’re not interested in that…you have to really want it.”

At MAK Transportation, Ficociello certainly deals with it.

“Maybe it’s my personality, but when I want something I go get it,” she said, adding that the key to MAK’s success has been one simple philosophy – truth.

“I’m very truthful, sometimes truthful to a fault,” she said. “But I don’t have to deal with it after that. Nobody likes the truth at the best of times, but at least they got the truth.

And that’s how MAK has continued, is just those two things of honesty and integrity, because this industry doesn’t have that.”

Women approach Ficociello looking for a job, but more to be a driver than to sit in an office.

Ficociello said she would love to see more women get into the trucking industry, as in her experience, most are very easy and efficient to work with.

“They ask all the questions that are needed in one phone call, not five,” she said. “They are very precise…they won’t move unless they have all their documents.”

One of the biggest challenges currently facing MAK is a change of the guard, with old drivers retiring and new ones looking to take their place.
“All the good guys are retiring,” Ficociello said. “I was spoiled for nearly around 20 years and now we’re hiring the younger guys. Anybody can pull a van around…it takes a different type of person to do what we do. It’s hard work…and it’s hard to get those guys.”

MAK has been sponsoring the Kelowna BMX club for nearly a decade, which is made up of kids who are raised in single-parent households.

The company also sponsors a golf tournament to raise funds for the local women’s shelter.

It’s a team Ficociello is proud of, and she’s thankful for having found success in the industry. But there was only one way she was able to find the honesty and integrity she so desperately needed from the trucking industry, and that was to go out on her own.

Unable to temper her emotions, Ficociello said more must be done both from a financial and recognition standpoint for those, like herself and father so many years ago, who make their living behind the wheel.

“Let’s give more back to the owner-operators and the drivers,” she said. “Those are the guys and the women who are really needing that pat on the back.”