Focus on collaboration, new relationships key for APTA in 2006 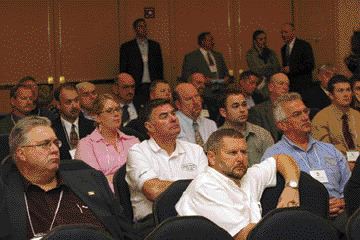 ATTENTIVE AUDIENCE: APTA members listen intently during the association's annual general meeting in October. APTA chairman Vaughn Sturgeon stressed the importance of partnering with government officials and other associations during his address.

HALIFAX, N.S. – New relationships and collaboration with government officials and other associations played key roles during the Atlantic Provinces Trucking Association’s annual general meeting at the Halifax Marriott Harbourfront Hotel in Halifax, N.S. Oct. 25-27. APTA board chair Vaughn Sturgeon provided members with the association’s annual report and discussed the highs and lows of the past 12 months.

“This past year has been a watershed year for the Atlantic Provinces Trucking Association,” said Sturgeon, who recently completed the first of his two-year stint as chair with the association. “It has been a year of dynamic and positive change. This was a year of new beginnings and new relationships with governments, regulatory bodies and related associate trucking groups. This year was a foundation rebuilding year in which the cornerstones were placed for the future of the association.”

The APTA underwent several staffing changes in the 2005-2006 year, including the appointment of Peter Nelson to the position of executive director and Jenn Gillespie taking over for Heather MacLean as director of policy and projects. MacLean left the APTA in June to establish a sector council for trucking human resources in her native P.E.I.

The APTA carried on with several of its trademark events this year, including seminars on cross border issues, safety and compliance initiatives, and management and human resource development programs. Added to the usual list was Hours-of-Service training and the North American Transportation Management Institute’s program for safety and compliance officers within the APTA’s member companies.

Several successful events made up the APTA’s previous year, including the 2006 Drivers Championship event in Truro, N.S. with a record number of participants at 70; the “wildly successful” 24-hour driver appreciation event in Salisbury, organized by the Safety Council; two well-attended golf tournaments; and the Truck Technology Conference which the association played host to in Saint John, N.B.

Among the association’s many collaborations over the 2005-2006 year, the APTA has also initiated talks with the P.E.I. Trucker’s Association, the Truckers Association of Nova Scotia, and the Southern New Brunswick Truckers Association, as well as representatives Newfoundland and Labrador’s Independent Trucking Associations on “engaging in a collaborative strategy on shared interests and initiatives within our region,” Sturgeon reported. “The discussions with our related associations are well-supported by board members and the initiative to foster new relationships within the trucking industry is felt to be vital as the industry adapts to changes in today’s environment.”

Sturgeon also reported that the forging of solid relationships with the federal government continued over the past year, with discussions taking place between APTA board members and some of Atlantic Canada’s representatives in Ottawa on issues ranging from the advent of ULSD to Marine Atlantic and Bay Ferries.

The APTA also rejoined the Canadian Council of Motor Transport Administrators in 2006 as part of a new initiative to develop collaborative and consensus-building relationships with governments and related industries and stakeholders. The CCMTA regulates and develops policy for the trucking industry.

The APTA continued its work with the Canadian Trucking Alliance in 2006, successfully lobbying to put more focus on the “good news” message the industry is sending to the government and media through the introduction of the new emissions standards for 2007.

“(The APTA) had managed to put tax initiatives on the table with governments to reward our industry for being leaders on the environmental protection front,” Sturgeon reported. “We are seeing positive returns with recent national media exposure. (The APTA) and CTA are at the forefront of the ‘Made in Canada’ resolution by the federal government on the environment.”

Sturgeon also announced the formation of several new working committees to deal with finance, governance, membership, human resource, education and independent trucking associations. The new committees will compliment the existing Associated Trades and Safety Council committees. The APTA also announced it would be embarking on a one-year program to review and renew its governance structure.

“This past year has been one of positive change for the Atlantic Provinces Trucking Association,” Sturgeon told members. “As your association continues to grow and evolve, it becomes more necessary to have collaborative and consensus-building relationships with all stakeholders. The coming year will continue to be one of change and growth for the future.”

The APTA’s membership also its Board of Directors for the year 2006/2007 at the annual general meeting. The new board directors, officers, executive and honorary directors are listed by region below: