Based in Cambridge, Ont., the 16-truck fleet is one that prides itself on having superior staff and drivers, all thanks to a little transparency.

Client Transport, just 30 years old, started out as a local cartage company. Today, it hauls dry freight and automotive parts around the Great Lakes all while making a name for itself in the industry. 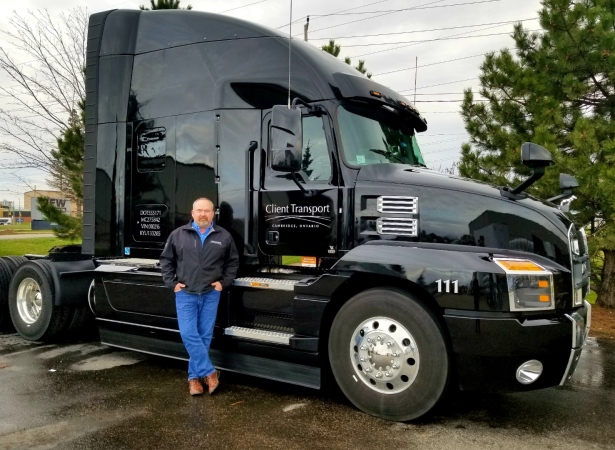 Recently, Client Transport was named as one of the Top Fleet Employers by Trucking HR Canada. The program recognizes fleets with sound human resources policies and practices, and Client Transport has more than just that.

Jason Hunt, general manager, who joined the company in 2011, said that getting the business to where it is today was his main goal when he started.

“Back then, we were outdated,” he recalled. “We had none of the technology we have today so I set my course back then in 2011 to bring this company to what I feel like is today’s standards and it’s been a seven- to eight-year plan. We are just about there.”

Hunt said when he began, he wanted to run the business differently. He had a lot of experience in trucking, and as a former driver he wanted to show his drivers that he understood their perspectives and knew they were more than just a number.

This plan worked out well. Today, turnover at Client Transport is virtually zero.

“We’re an extremely honest company,” he said. “That’s our big thing. When we’re hiring drivers, we let them know first and foremost we will never have a dispatcher here try and push them around. We’re very transparent. We try and provide our drivers with the latest technology and equipment. We give them company cellphones and tablets. We try to give them new equipment. I have some older trucks, but we just purchased some brand new Mack Anthems that are gorgeous. And our pay structure is very competitive. When we see the industry is making changes, we make those changes too.”

Hunt also said hiring is important to the business and something he doesn’t take lightly, always interviewing new hires personally.

“Our greatest strength is our staff and drivers,” he said. “We don’t just hire anyone off the streets. My inside staff are dedicated and they see the same vision as I see; us as a team, and working together to build something positive. We are not a company that is huge on growth and revenue. We see that, but our profit margins aren’t as important as keeping a good team together.”

Hunt said he is proud to have cultivated such a sustainable culture within Client Transport, a place where his staff members are happy to go to work each day.

Part of that, is the flexibility Client offers it staff members.

“We give them the freedom to grow on their own, but at the same time we coach them,” Hunt said. “We coach a lot here and help build that direction. If you get enough of those people in that room, you can do a lot of things.”

New hires can also discuss their desired work-life balance, so routes can be designed for them, as needed.

The other part of the culture has to do with Hunt himself. Drivers appreciate having a manager who understands what it’s like to be out on the road. And Hunt isn’t afraid to deliver a load when push comes to shove.

“I still drive today,” he said. “And my drivers see that. They know and trust that we won’t ever leave them hanging. We want them to know we are here and we support them.”

Like many trucking companies, Client is feeling the pinch of the driver shortage.

“The biggest challenge for us right now, is the driver shortage,” Hunt said. “Even though we’ve seen it coming for 20 years. It doesn’t matter who you talk to, there’s always a trick.

Everyone has a technique or something to say to these guys to get them to drive for them, and it drives me crazy. We are as honest as they come. We try to be so transparent with these guys we hire. We let them know how things are done around here. We know we’re not the big name out there, but we are just as good because we are here for our staff. They’re not just a number. They’re not just a truck. When we can get them into the door, and they can see that, we have them. It’s just trying to get them in the door that’s proving difficult.”

In the next few years, Hunt has his eyes set on slow and steady growth.

“I like gradual growth,” he said. “Maybe a 25-30 truck fleet in the next five or 10 years. I want to see consecutive growth. Client Transport will continue to climb.”