Laying It All On The Line

October 1, 2009
WOODSTOCK, Ont. - On Hwy. 21 in southern Ontario, there's a cross that burns with a bright white light -a lighthouse-like symbol that guides drivers safely through darkness, snowstorms and fog. The cr... 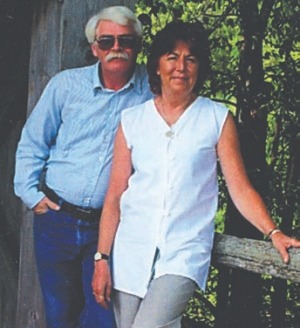 FOND MEMORIES: Wendy Foulis and her husband Ron share a moment in better times, before his health deteriorated while far from home.

WOODSTOCK, Ont. –On Hwy. 21 in southern Ontario, there’s a cross that burns with a bright white light -a lighthouse-like symbol that guides drivers safely through darkness, snowstorms and fog. The cross stands not only as a beacon, however, but as a memorial to a driver who practically gave his life to get his load -and himself -home to his beloved wife.

The story of Ron Foulis’ final months on the job could serve as a cautionary tale for any driver who ranges far from home. It’s a tale of frustration and heartbreak, peer pressure and economic pressure, and it illustrates the importance of knowing your health and your insurance coverage, knowing your own body and the signals it sends you, and knowing your rights and responsibilities.

Foulis had been driving for more than 30 years, but the last few hadn’t been kind. He’d been involved in a fatal accident in Alberta, in which his truck had backed over a man and though, according to his wife, no fault had been found with his actions, it affected him greatly and caused him to be off work for an extended period.

“Ron had been seeing a trauma counsellor over the accident,” Wendy Foulis says, “paid for by our insurance company and the union, and he’d been complaining about tingling in his fingers and feet and a numbness in his arms.”

Wendy says their family doctor ordered a stress test after some prodding from Ron’s trauma counsellor, but it had to be put off because they were seriously behind with their rent and other expenses. “Ron always believed he had to support his family,” Wendy recounts, “so he decided to go out west and earn some money.”

As it turned out, that was a fatal decision.

Wendy says Ron’s boss told him he’d get him work in Saskatchewan. “He told Ron to just keep driving until he told him to stop, so he really had no idea where he was going.” She says it didn’t feel right. “There was an ominous feeling,” Wendy recounts. “We were both crying, but we knew it had to be done, especially knowing he was only going out there with $60 in his pocket.”

Foulis picked up his trailer in Woodstock and headed west, waiting for the call that came finally when he reached Estevan, Sask. “But the western office didn’t even know he was coming,” his widow says, “and he didn’t get a very good reception.”

They did try to find him work, though, and she says he ended up doing “some real boondock kind of things, out in the bush.” The tingling and numbness he was still experiencing meant he had difficulty handling the truck’s hydraulics, Wendy says, but he pressed on.

Ron thought the sensations stemmed from an accident years earlier in which a high-pressure water hose had let go and ripped open his chest, took out part of his lung and torn across his arms. He’d had pains and strange feelings ever since, so he tended to ignore them.

Another unfortunate decision. “Ron was run hard in Saskatchewan,” Wendy remembers, saying that at one point he had to drive from Saskatchewan to Calgary for a two-day Red Cross course on his days off, after working 11 days straight. Ironically, one of the things he learned was how to defibrillate.

“When I talked to him on the phone he was whispering so I couldn’t hardly hear him,” Wendy says. “I told him to speak up and he said ‘Baby, this is as loud as I can talk.’ He was coughing and couldn’t catch his breath. I told him to get to the hospital right away.”

The way Wendy tells it, Ron showed up at the emergency room of the Weyburn General Hospital, but was turned away “because he was from Ontario. But he was in such bad shape he had to go back.” She says the emergency room doctor diagnosed Ron as having a chest infection, gave him a steroid inhaler and prescriptions for antibiotics and Sudafed, then released him. It turned out that his real health problem was very different and much more serious.

His health situation didn’t help him at work, either. “The people thought that because Ron was sick he wasn’t giving his all to the job,” Wendy says, “but he was the kind of man who goes further than he has to. He had a great reputation.”

Reputation or not, however, sick is sick. “He called me, crying,” Wendy remembers, “and said ‘I can’t even get this right. They’re sending me home because I’m sick’.” Wendy says Foulis was told if he was too sick to drive safely on Saskatchewan roads that “he should go back to Ontario and get checked out by his physician.”

Wendy says the company eventually told Ron they had a load for him to take back to Woodstock, but he’d have to wait for it to come in from Calgary. “It was unbelievable,” Wendy remembers. “The man was sick, was on antibiotics.”

The trip home took four-and-a-half days. “I was out waiting for him,” Wendy says, and “when he finally backed into the driveway, he literally fell out of the truck and into my arms. He said ‘My baby, we will never be apart again.’ I started crying because I took one look at him and I knew he was so sick.”

They spent the night at home, after which Wendy took Ron to the Petrolia hospital, where tests showed he’d suffered a heart attack.

“The doctors told him he wasn’t leaving the hospital,” Wendy says.

The good news was that he was at least close to home. “Everyone at church who knew where he was came down to see him -his room was filled with people,” Wendy says, reminiscing about Ron laughing and talking to the visitors. “The nurses couldn’t get over what a bubbly person he was -he lit up the room. He was like a little boy, so excited to be back.”

Unfortunately, the bad news kept coming. Foulis was sent to London for an angioplasty and Wendy says that, when she asked one of the doctors for the result “he said ‘Have you got a bullet?’ And he laughed, like we should put him out of his misery.” Wendy says she was “off in La-La land” by that point, not knowing what was going on and “nearly falling apart.”

Surgery was called for and “they had to take five veins out of his legs and use them,” Wendy says. “And when he came out of it they told me to brace myself and not to let Ron know how I felt about how he looked.” He was in dire straits, his head tied down with an elastic band and one wrist and both legs restrained. “I thought ‘My God I didn’t know it was this bad!'” she remembers.

Ron came to the next day, but was still “out of it” because of the pain. “He’d motion with his feet because he couldn’t talk,” Wendy says. “Motioning for me to move to his side. He was able to raise his arm up and he grabbed my hand and said “I love you” and then waved goodbye to me and fell asleep again.”

It was the last thing Ron ever said to Wendy.

“He was resting peacefully, so I eventually decided to go home and come back in the morning,” Wendy says, adding that the hospital called at 5:30 the next morning and advised her to get back there immediately. “His heart stopped 13 times,” she says, “and every time they’d come in with this equipment and put these paddles on his chest -I had to cover my eyes.”

Then came one of the worst questions imaginable. “They came into the room where I was sitting and (the doctor) asked me if I wanted to keep him on life support. I said ‘My God, no. Let him go. Let him go.’ I’d had no idea it was that bad.”

Ron Foulis, from whom Wendy had been virtually inseparable since they met in 1992, died the day before their 16th wedding anniversary.

More than a year later, Wendy Foulis says she’s still angry with the hospital in Weyburn, and with the company he was working for.

“They sent him home in that condition with a load of trains,” she says of the latter, “and through northern Ontario, with all those hills. I can only say that God was at the wheel on that trip because there’s no way Ron could’ve driven that truck. He couldn’t even pick up his overnight bag when he got home.”

Wendy says doctors determined that Ron had a 90% blockage of his left ventricle and 100% of his right. “His family doctor didn’t even d
o anything about it,” she says, “and wouldn’t you know this doctor moved away a couple of months later.”

Foulis says her efforts to get legal recourse in Saskatchewan have been frustrated. “If you have a malpractice suit against a doctor,” she says, “you have to have a lot of money and it’s going to go on for years.”

She says the lawyers wanted a retainer of $10,000 to $15,000 as well as a heart specialist’s report, which she says can also cost thousands. “I would dearly love to sue the pants off this man who determined that Ron had a chest infection, but I don’t have the money.”

All she was left with, she says, was her husband’s life insurance policy.

“I turn 60 this year and can get old age pension -but if Ron knew how I’ve been left to fend for myself after the way he put me on a pedestal…” her voice trails off. “We’d always say to each other ‘Forever and ever’,” she says finally. “Every night he’d put his arm around me when we went to bed and I’d hold his thumb to go to sleep. Now my buddy isn’t with me.”

Wendy hopes her and Ron’s story will serve as an example for other drivers who may find themselves far from home when a medical emergency strikes -and maybe as a wake-up call for bureaucrats, unions and companies.

“I want people to know that this wonderful man had all the cards stacked against him,” she says bitterly. “No matter what way he turned it wasn’t going to turn out good and for all the people he helped in his life there was no-one to help him when he needed it.”

She also has some advice for dispatchers. “They need to be a little more compassionate,” she says. “The dispatcher (out west) was so ignorant to Ron, and it shouldn’t be that way because the drivers are making them money, they are paying them. It’s a rough world right now and they need to give their drivers the respect they deserve.”

That respect for drivers of which she speaks is one of the reasons why the illuminated cross Ron Foulis built still shines brightly on Hwy. 21. “After he passed away,” Wendy says, “I found a plant there with a card saying ‘Thank you so much for that cross because it has given me hope every time I’ve felt down or felt lost. It has helped me get through’.”

And so the bright white beacon remains, a safety marker for drivers and a luminous monument to Wendy Foulis’ best friend.

‘God was at the wheel on that trip because there’s no way Ron could’ve driven that truck.’