What started off as a few trucks to move automotive parts from Point A to B has turned into one of southern Ontario’s most successful trucking companies.

Linamar Transportation was founded in 1986 as a part of Linamar Corporation, an automotive parts manufacturer based in Guelph, Ont. At first, Linamar was used to transport its own materials, but many are surprised to learn it hauls more than just car parts and is actually registered as a for-hire carrier.

Today, Linamar has a total of 90 trucks. Two-thirds of its drivers execute cross-border services, while the rest stay in southern Ontario. 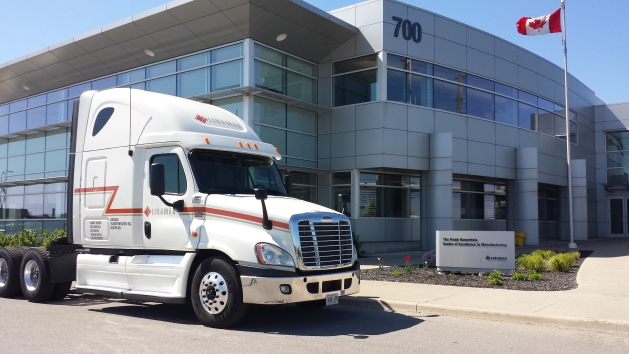 “We haul anywhere from southern Ontario to Minnesota to Tennessee to North Carolina, through Ohio and Michigan,” said Michelle Drew, the company’s human resources manager.

“We do a lot of work in Michigan because Linamar Corporation does a lot with the automotive industry.”

The company has its main facility in Guelph, though it also has yards in Michigan and Windsor.

Last year was a special one for the company, as it not only celebrated 30 years in business, but was crowned Trucking HR Canada’s Top Medium Fleet at the Top Fleet Employers gala. It boasts a 99.5% on-time delivery and pick-up rate.

It’s not hard to see why Linamar was chosen for the award when you delve a little deeper into its business model and you understand how its drivers and staff are treated day in and day out. Drew says the trucking company has really put a large focus on communication and it has done so for some time.

“We’re also very fortunate to have a passionate and dedicated team of drivers and staff here,” she said. “They’re really great. Everyone here works well together and even though we’re 140 in staff in total, it’s like we’re one big family.”

For example, though many companies claim they have an open-door policy these days, Linamar puts its money where its mouth is, claims Drew.

Every month the company hosts a driver forum meeting.

“It’s an open invitation to all drivers,” Drew explains. “We host them on Saturday mornings, when most drivers are likely to attend.

“We take them all out to breakfast and then come back to the boardroom. In the boardroom we have representatives from HR and management. We tell them about sales targets and any upcoming changes they can expect. And in turn, they talk to us openly about any concerns they have and what’s working for them and what’s not.”

Drew explained that this is much more than an open-door policy, it’s a way for the business to work with its employees and come together as one. These meetings have generated so much momentum for Linamar that now it rewards suggestions from employees during these monthly meetings.

“We really do encourage employee suggestions,” she said. “In fact, we reward them. Anyone can give a suggestion on how to reduce costs or reduce waste, and if we end up implementing it, we give them a monetary reward. It has made our business better. We implement hundreds of suggestions a year.”

Linamar is also forward-thinking when it comes to technology. It rolled out electronic logging devices (ELDs) in January 2016 and has never looked back.

“Like anything new, it took a little while to get everyone up and running, but now it’s great,” she said. “All the drivers love it…I haven’t heard of anyone with an issue. The biggest kickback is when their truck is broken down and they have to use a truck without an ELD and they have to go back to paper logs. ELDs have been really good for us and it makes a driver’s job that much easier.”

Linamar drivers are quite happy where they are too, says Drew, who adds that the turnover rate is low at the moment. And that’s because of a number of things.

“We have great equipment that our drivers love to drive,” she said. “All of our equipment is five years old or newer, including trailers. We make sure to spec’ the trucks so they are comfortable. They’re all automatics as well, which we know our drivers like.”

Drivers also appreciate being directly involved in the company. Not only through the monthly driver meetings, but by joining management at industry events.

“We were able to bring some drivers to the (Trucking HR Canada Top Fleet Employers) gala,” Drew said. “And that was really great.”

In terms of recruiting, Drew said the trouble isn’t filling trucks, rather replacing her older drivers.

“We have a low turnover rate and so my problem isn’t filling in trucks, it’s that my demographic is getting older and I have to replace those who are retiring and there’s more and more every year,” she said.

The company accepts and hires newly-licensed drivers and finds that a successful route to go when hiring, because they can groom them into a Linamar driver that is successful.

“We have a very successful finishing program in place for new graduates,” Drew said. “That is an eight-week long program that our newly-licensed and hired drivers take. That’s worked really well for us. We did implement a sign-on driver bonus for drivers that brought on a driver with two or more years’ experience, but we found that we had more success when we trained and groomed newly-licensed drivers.”

Linamar will be taking that approach when it looks to hire more drivers in 2017, as the business looks to exceed its ambitious growth goals.

“We are attached to the manufacturing side of our business, but looking at what’s going on in 2017, we are looking to grow by 10% for the new year,” Drew said. “And that’s organically. It’s all just a matter of finding the right people, training them well and hoping they stay.”