Okay, so back to why I was in Hannover, Germany in the first place. I was there, among 500+ of my closest truck journalist friends, to see Daimler unveil its vision of the future of trucking. You’ll recall the autonomously-driven Future Truck 2025 that was demonstrated on a stretch of German Autobahn in July. At that time the truck’s technological abilities were showcased, but its face was concealed by a camo-style paint scheme designed to confuse the eye and conceal the design of the truck. 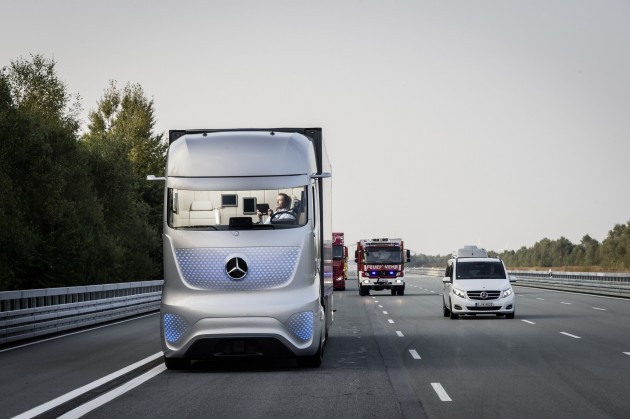 That mask was removed at Daimler’s IAA press demonstration and we got our first complete look at what the Future Truck may look like. It looked…futuristic? Okay, that was too easy. This was a sleek-looking truck with a clean design free of pretty much any obstruction that can impede airflow. It didn’t even have headlights. Well, they were there, hidden underneath the skin of the vehicle. When turned on, the LED headlights shine through the paint to illuminate the way.

Also gone were the rearview mirrors, replaced with a small camera system that displayed the view down the side of the truck and trailer on screens mounted inside the cab. Depending on the position of the truck and the presence of other vehicles, these cameras will self-adjust so the driver always has a complete view of his surroundings. I don’t know how this truck’s cooling system works but there was virtually no grille. The front end lights up when the truck is started and when its Highway Pilot automated driving capabilities are activated, the light changes from white to a pulsating blue which looks very, very cool.

Dr. Wolfgang Bernard, head of Daimler Trucks globally, let the truck drive him to the venue before taking its reins and steering it into the airport hangar where the demonstration was held. I thought this was a gutsy entrance and I’m sure it kept countless Daimler PR people awake at night in anticipation of everything that could go wrong. Nothing did. I’m a jaded journalist and even I got caught up in the moment as the truck drove itself towards the hangar.

If you want to know what it was like to be there just check out this video:

While the Future Truck 2025 is still a long way from being a reality on North American roads (2025 may be overly optimistic), there’s no reason that some of the design elements found on the Future Truck (such as the hidden headlights and camera-based mirrors) can’t be engineered into production vehicles long before 2025. Daimler didn’t reveal any such plans so we’ll have to wait and see. In the meantime, here’s my full report on Daimler’s IAA Future Truck demonstration.