August 1, 2008
WALCOTT, Iowa - The 23-year-old Canadian truck driver was in no rush to enter the Shell Rotella SuperRigs competition, one of the most prestigious truck shows of the year, held last month. 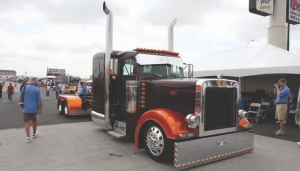 PAYOFF: Ryan Danylchuk won $10,000 and a spot in the SuperRigs calendar when his truck won Shell's prestigious competition.

WALCOTT, Iowa –The 23-year-old Canadian truck driver was in no rush to enter the Shell Rotella SuperRigs competition, one of the most prestigious truck shows of the year, held last month.

Ryan Danylchuk was in the midst of hauling from Winnipeg to Newport, Indiana, and only four hours from the Iowa show, when he decided to make a run for it.

“I just figured ‘I know a lot of guys from the states there. I’ll just drop by and say hi.’ I was in the area, anyway,” he recalls.

He arrived one day late for the three-day show, pulling in at night. Danylchuk decided to take his chances, and headed straight for the truck wash.

He stayed up all night, polishing his outlaw-style 2001 Peterbilt 379 until sunrise. The dark plum truck, with orange metallic fenders, had already created a buzz on the North America truck show circuit earlier this year, yet

Danylchuk was not overly optimistic. Just as he was about to hit the sack the following morning, he got a call from the show officials – that he had won the top prize.

“That was pretty shocking, actually,”he says. “It didn’t kick in until later in the day. I was pretty excited. I’ve never had anyone give me $10,000 before.”

Danylchuk’s truck is long and low to the ground, with a design that he calls “half old-school, half newschool.”

The colour scheme is candy plum that appears dark at night, yet glows bright purple under sunlight. The fenders are bright orange during the day, but look copper in the dark, a stylish effect that may have appealed to the show judges.

“I think that was the big kicker,” he says. “It’s the paint job that is the one thing everyone likes.”

The young truck driver has been at the wheel since he was 18, a dream job that he aimed for since he was a child. His father gave him the Peterbilt when he was 15, but a friend drove it until Danylchuk had all the credentials. It was a family plan that included a payment arrangement, overseen by the patriarch fleet owner of E. B. D. Enterprises, who demanded full payment for the truck before his son could “dress it up.”

Danylchuk credits his father’s mechanic, Randy Viskup, for rebuilding the truck, and Derrick’s Sandblasting and Painting, located in Winnipeg, for the exterior transformation.

“They did a lot of work on it.” He says the interior is a throwback to the 1980s, and done in “button tuck.”Other exterior changes include the visor and the grille, which the proud owner says, looks like a bowtie, anchored by eight-inch stacks. While the young trucker is new to the show scene, he does understand what impresses the judges. He won Best-in-Show at the recent Winnipeg Truck Show, after once again pulling in late and getting the last spot at the end of the line on the show route.

Before that, he won second place at the Mid-America Trucking Show, and Best-of-Show at Wildwood Florida. “It’s been a pretty good year,” he says.

Trucks entered in the annual Shell Rotella SuperRigs competition are judged based on exterior appearance, design, detail/finish, originality, and workmanship. The event was held at the Iowa 80 Truck Stop located off exit 284 of Interstate 80 in Walcott, Iowa, from June 5-7, and is considered the premier truck beauty contest for actively working trucks. O/Os from across the US and Canada vie for cash prizes valued at $25,000, with the Best-in-Show winner earning $10,000.

Additionally, 12 drivers (including Danylchuk) were selected to have their truck featured in the 2009 Shell Rotella SuperRigs calendar.