BLENHEIM, Ont. — If there’s one thing Steve Hibbert believes in, it’s treating his employees and customers like gold.

SM Freight was founded at the turn of the millennium by a local Blenheim, Ont., resident. By 2007, he sold the company consisting of close to 30 trucks to Hibbert.

“When we purchased it, it was just a trucking company,” Hibbert said. “It was unique, there was a lot of equipment. Mom and pop spent money here and there. And the timing couldn’t have been worse because of the downfall, and the recession. And of course, we were a bit naïve and loved trucking, so we pushed through it anyway, and we proceeded to make a trucking company. And we went from turnkey to turnaround. And that’s what we did.” 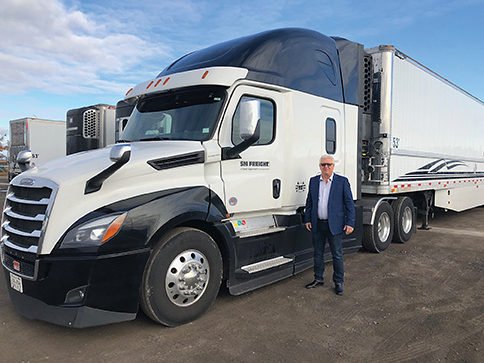 Today, the fleet consists of 84 trucks and 140 trailers, 60 of which are reefers. Mostly, the company hauls produce, other food products, and pharmaceuticals to Washington, California, the midwestern states, and Quebec.

“In 2007, we were strictly produce and seasonal,” he said. “Seventy-five to 80% of all our produce comes out of Leamington. And being food-related, the business was always there, but it was seasonal and would slow down, because greenhouses don’t ship once November comes. So, we had to diversify a little bit. And we got into different frozen shipments, and things like that after, but we like to base our core business around refrigerated stuff.”

Driver turnover is pretty standard, according to Hibbert.

“I find the bottom 10 drivers we have are always a problem,” he said. “But at the same time, we have quite a few drivers who have been with us since they started in 1999 and when we first started in 2007, we hired some young guys who have done really well for us.”

Those who leave, “think the grass is greener,” Hibbert said.

Those who stay, do so because SM Freight is committed to continually increasing wages for drivers, having great benefits, and driving clean, new equipment, Hibbert said.

“None of our trucks are more than four years old,” Hibbert said. “Plus, we have an open-door policy. And if I’m not here or it’s night, everyone here knows they can call me anytime to talk. And that’s guys in the shop, dispatchers, drivers – management always makes an effort to talk to them. And not only when they have a problem at home, but asking them how their day is going and stuff like that. And I think that makes a difference. People really respect that.”

Hibbert recalled one instance when a driver came to him after his wife ran up all of his credit cards.

Hibbert is also a big believer in treating customers right.

“The way we deal with customers makes us stand out from the competition,” he said. “I have a saying that goes, ‘If a customer calls or sends you an email, he/she sent it for a reason.’ And I mean that. So, everyone here knows, you give that customer an answer, even if it’s just to say you’re working on it and will get back to him/her.”

Right now, the business isn’t suffering too much from the driver shortage, but Hibbert said more trucks than usual are sitting empty in his yard than he’d like.

“Today, we have four or five trucks empty,” he said. “But in April we were full, and guys were waiting to come on.”

“And we’re going to have to look at the U.K. or the South Asian population in Toronto to recruit more drivers. The local farm boy isn’t walking in off the street anymore,” he said.

“But we are still looking for long-term employees. We want to sign people who are passionate about trucking, because we know they will be happy here for a long time.”

In the near future, Hibbert said he hopes to continue to grow the business to double its current size.

“We’ve got to continue to grow,” he said. “We can’t sit on our laurels, and we have to continue to grow. We think we will grow through acquisition. I was always a firm believer in growing organically but it’s getting tougher to do that. Where do I see us in five years? Probably with 140 trucks, that’s what I envision. I could be crazy, but that’s what I think.”