MTO enforcement officers put their skills to the test

LONDON, Ont. — When you roll across the scales in Western Ontario and transport enforcement officer Steve McPherson is on duty, you better have your ducks in a row.

The eagle-eyed MTO enforcement officer was named Grand Champion at Ontario’s 22nd annual NSC Challenge, held July 11 at the Flying J in London, Ont., alongside the Ontario Truck Driving Championships. McPherson was one of 10 transport enforcement officers who competed in the provincial championships, representing the west region. 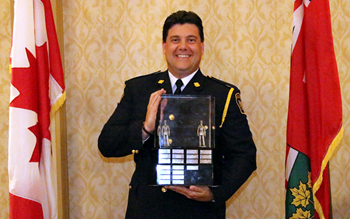 He will now go on to represent Ontario in the North American Inspector Championships in St. Louis, Mo. Aug. 10-14. Ontario traditionally has fared well at the North America-wide competition, according to Peter Hurst, MTO’s director of carrier safety and enforcement, who spoke at the awards banquet.

“Overall, the MTO has had four Grand Champions in the North American competition since 1997 and that is an achievement that is unequaled anywhere,” Hurst said to applause.

He also noted Ontario’s on-road safety performance has steadily improved, a trend that continued through this year’s Roadcheck, with an out-of-service rate of 15% – down 6% from last year – in Ontario, Hurst revealed. (Full Roadcheck results won’t be released until August, according to the CVSA).

Hurst also heaped praise on the professional drivers in attendance, who earlier that day competed in the Ontario Truck Driving Championships at the same venue, and lauded the collaborative nature of the event.

“It’s a unique opportunity for the officers and drivers to meet in a collaborative environment, as opposed to one that might be more combative, to share their knowledge and appreciate that we share the same goals,” Hurst said. “That goal is safety.”

An MTO enforcement officer slides underneath a tractor-trailer during an inspection.

Jeff Hudebine, director, regional operations, road user safety division with the MTO, told Trucknews.com during the competition that the event pits the top truck inspectors from across Ontario against each other. Under the blazing July sun the coverall-clad officers were required to: complete a full commercial motor vehicle inspection, dangerous goods inspection, motorcoach inspection and also to interview a driver and inspect their logbook.

This year’s winners were: