OTTAWA, Ont. – Results of Canada’s 2016 International Roadcheck were released this week and according to the numbers, in Canada, nearly 82% of commercial vehicles inspected this year passed CVSA’s on-road inspection criteria.

The three-day blitz took place June 7-9, 2016 across Canada, the United States and Mexico. In Canada alone, inspections were carried out at random at 146 sites across the country. In total this year, 1,698 commercial vehicle enforcement officers conducted more than 8,100 Level 1 inspections (the most thorough of the on-road inspections). Results show that 7,736 of the trucks, trailers and passenger carrying vehicles were issued new decals to show they met the highest degree of safety and mechanical fitness according to CVSA. 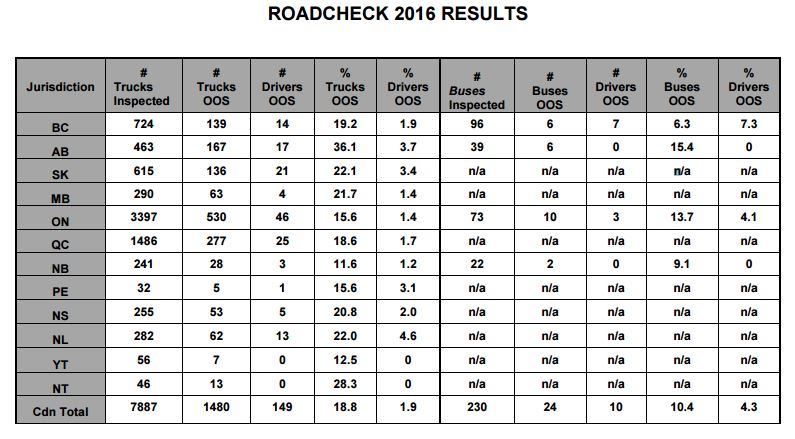 Broken down by province/territory, Alberta had the highest out-of-service average across Canada.  In Alberta this year, 463 trucks were inspected during Roadcheck and 167 were placed out of service, bringing their OOS average to 36.1%, well above the national average.

On the flip side, New Brunswick had the lowest out-of-service average in Canada. In New Brunswick, 241 vehicles were inspected and just 28 were placed out of service, meaning they had an average of just 11.6%.

Ontario had the highest number of vehicles inspected during Roadcheck with 3,397 truck inspections completed. Of those, 530 were placed out of service, bringing the Ontario OOS average to 15.6%.

“Enforcement and industry officials alike know that education and awareness are key to improving commercial vehicle safety,” the Canadian Council of Motor Transport Administrators (CCMTA) said in a release. “As such, CVSA Region V officials strongly encourage governments, industry associations and individual carriers and drivers to take an active part in the upcoming 2016 Brake Safety Week planned for September 11-17 as well as Operation Safe Driver (OSD) Week October 16-22. Both events are hallmarks of CVSA and have been identified as best practices key to enhancing knowledge, regulatory compliance and overall highway safety. All industry players – carriers, drivers and enforcement officials alike – are urged to continue working together to achieve a sustained incremental drop in the CMV out-of-service rate nationwide in the years ahead.”

CVSA said that US results of Roadcheck are expected to be released in early September.