A single lane reopened Oct. 27 allowing vehicles through, but delays continued, and motorists and truckers alike were forced to deal with traffic congestion and extended wait times.

As of Nov. 2, Marnie DiGiandomenico, senior communications advisor, highway engineering services, strategic policy and investment directorate for Parks Canada, which is the authority over the section of highway affected, said they expected both lanes of the highway to open Nov. 3.

“However,” DiGiandomenico added, “motorists should expect occasional single lane alternating traffic and periodic delays of up to one hour between 8 a.m. and 10 p.m. from Nov. 2 to Nov. 4. In addition, a full road closure of three to four hours will be required at a date and time to be determined later this week for a large rock blast that will further stabilize the rock face.”

The slide sent truckers south on Highway 93 toward Radium, B.C., a route that added 210km to their trip, and, as Andrew Barnes, director of compliance and regulatory affairs for the Alberta Motor Transport Association (AMTA), pointed out, affected their hours-of-service as well.

“A lot of them were coming out of Calgary and going to Vancouver,” Barnes said, “and what they can usually make in a day legally under the federal hours-of-service they couldn’t make in 13 hours driving, so they had to stop. So it turned out to be a pretty big cost increase to the carrier, which then dribbles down to some of the shippers…and even consumers were affected.”

Barnes said around 400 Alberta trucks were diverted around the rock slide each day the Trans-Canada Highway was closed, and estimated a $75,000 a day cost to the industry as a result.

Barnes said the detour created an extra three to four hours on the road for Alberta drivers looking to make their way west.

“This rock slide really did bring into light how it really does hamper the industry,” Barnes said of the effect when a national highway is closed due to an incident.

Barnes did add that he feels the trucking industry is adaptive when it comes to these kinds of roadblocks, and drivers find a way to get their cargo to its destination.

Parks Canada was advising motorists to expect traffic congestion and up to one hour delays between Oct. 31 and Nov. 2, and that longer road closures would be required for rock blasting to further stabilize the rock face and prepare the highway for two-way traffic.

The rock slide occurred 16km west of Field, B.C. the night of Oct. 24 while work was underway to clear rock and debris from the highway several hours after the daily rock blast on a nearby rock slope re-profiling project.

Two excavator operators working at the site were transported to hospital with minor injuries and later released.

Parks Canada said early indications of the cause of the slide are that the slope failed below the drilling and blasting elevation along natural seams in the shale bedrock. Approximately 10,000 cubic meters of rock was released in the slide. 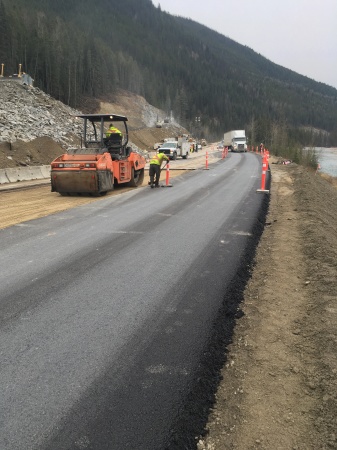