Earlier in the day, Nevada Governor Brian Sandoval issued Daimler the first licence to operate its autonomous truck technology in the state. The Freightliner Inspiration Truck – still disguised by hood bonnet – then whisked away Sandoval and Daimler Trucks’ global boss Dr. Wolfgang Bernhard. Journalists visiting from around the world were last night taken to the Hoover Dam, where a spectacular light show preceded the complete revealing of the Inspiration Truck atop the dam.

The projection – at 1.17 million lumens – earned Freightliner the Guinness World Record for the highest light output projection ever.

“The Hoover Dam provides the ideal setting for a debut as significant to the trucking industry as this. Not only was it built primarily using trucks, but it signifies inspiration like few other structures in the world. To show the significance and opportunities of autonomous driving functions for the global trucking industry we were willing to go ways that people did not dare to think about before,” said Dr. Bernhard. “The Inspiration Truck’s debut was made even more notable with Freightliner’s Guinness World Record of the highest light output projection ever.”

The launch was simulcast on FreightlinerInspiration.com, where a collection of videos are available to view.

The Inspiration Truck debuts Daimler’s Highway Pilot autonomous truck technology, demonstrated last year at two events in Germany. Bernhard said then that the system would first be deployed into whichever global market developed the regulatory framework to allow it. Nevada was the first to step up – though DTNA CEO Martin Daum acknowledged other states and provinces must follow, for it to become widely viable across North America.

The Inspiration Truck still requires a driver to oversee the system, which can take control and handle driving duties at times, even allowing the operator to focus on other, non-driving tasks. Daimler says 90% of truck crashes are the result of driver error and that autonomous vehicles can reduce crashes while improving driver productivity and road safety.

No roadside infrastructure is required by the Inspiration Truck, besides a set of legible lane markings. The technology has already undergone significant testing.

“Putting the Freightliner Inspiration Truck on the road is an historic day for Daimler Trucks and the North American trucking industry,” said Dr. Bernhard. “Our team has done a marvelous job in bringing this breakthrough technology to the road.”

The Hoover Dam was selected for the launch because it represents the ability to dream big and accomplish amazing things, even in the midst of adversity, Daimler officials explained. It was built during the Great Depression under harsh conditions, yet took fewer than five years to complete.

The Freightliner Inspiration Truck will be demonstrated to journalists today, and Trucknews.com editors will be among those to ride in the truck while in autonomous mode. The event has also garnered attention from the mainstream media, with numerous major newspapers attending and featuring a live TV report on Good Morning America.

More details about the technology will be revealed today, but essentially the Inspiration Truck features what NHTSA defines as Level 3 autonomous vehicle capabilities, enabling the driver to cede full control of all safety-critical functions under certain traffic or environmental conditions. 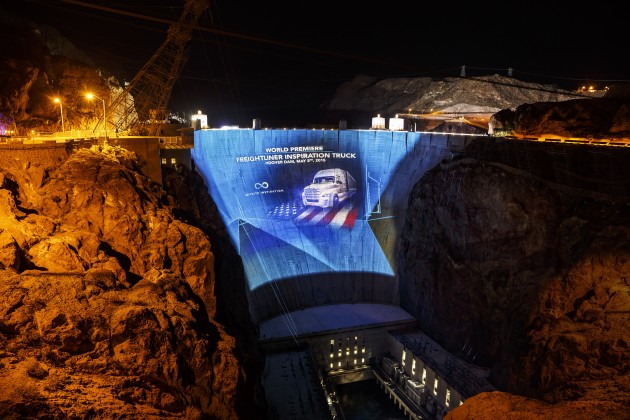 “Freightliner Trucks does more than any other commercial truck manufacturer to integrate the truck, the driver and the business. The Freightliner Inspiration Truck is a case in point because it is not a driverless truck – the driver is a key part of a collaborative vehicle system,” said Richard Howard, senior vice-president, sales and marketing, DTNA. “With the Freightliner Inspiration Truck, drivers can optimize their time on the road while also handling other important logistical tasks, from scheduling to routing. The autonomous vehicle technology not only contributes to improved safety and efficiency, but allows for improved communication through connectivity and integration.”

Trucknews.com will have much more news from this event in the days ahead. 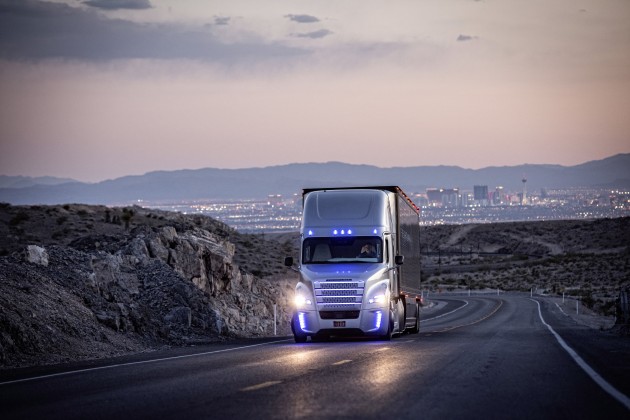