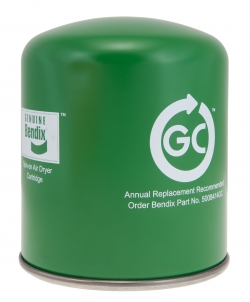 The GC refers to Green Cartridge, and it will be available as of August 20. It can be used on any North American air dryer that calls for a standard 39-millimeter spin-on dryer cartridge with a right-hand thread, but not in applications requiring an oil-coalescing filter.

Desiccant attracts moisture during the charging cycle, and is exposed to pressure cycling, high temperatures, road vibrations, and air that’s saturated with moisture and oil aerosols passed by a truck’s compressor, the company notes. But Bendix is able to reprocess its material, mix it with new content, and create a final product that essentially matches the performance of new OEM-grade cartridges. They’re sold as service-new with no core charge.

Bendix estimates more than 500,000 spin-on air dryer cartridges, containing about a million pounds of desiccant, are thrown out across North America every year.