October 1, 2007
DALLAS, Texas - There's a common school of thought that there are no new ideas and instead of trying to invent something, it's best to borrow from someone else and make it better; basically, 'don't tr... 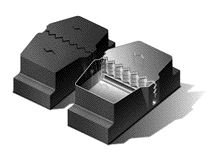 DALLAS, Texas – There’s a common school of thought that there are no new ideas and instead of trying to invent something, it’s best to borrow from someone else and make it better; basically, ‘don’t try and reinvent the wheel.’

For the past few years, Michelin has been making small innovative steps in the world of rubber and recently created a product, which essentially reinvents the wheel – or more accurately, regenerates the wheel.

“We were essentially stuck in the design, so we needed a way to break through,” explained Marc Laferriere, vice-president of Michelin. “We’ve been doing a lot of small steps in the way of innovation, and we had to make a major breakthrough and we named that breakthrough Durable Technologies. The new tread features basically allow us to expand the way the tread works.”

Michelin unveiled its latest innovation from its Michelin Durable Technologies research, the new XDA5 drive tire for Class 8 trucks, which is equipped with a tread pattern that regenerates as it wears.

The tire company made the announcement during the Great American Trucking Show (GATS) in Dallas on Aug. 23.

Michelin used patented design and manufacturing techniques to mold the tread of the XDA5 in three dimensions. As the tire wears, the tread reveals new grooves and tread blocks, effectively giving the tire a second life – self-regenerating to improve wet, worn traction.

“Incorporating three-dimensional features into the tire tread that must interact with each other as the tire rolls down the highway required Michelin to develop additional innovations in our manufacturing processes,” said Jean-Michel Guillon, chief operating officer, Michelin Americas Truck Tires. “The result is a sophisticated tread design that works to preserve itself as it performs. We are very excited to bring this technology to the marketplace as it dramatically raises the bar for high mileage tires.”

This regenerating tread design keeps the tire in service longer before retreading, a 30% improvement in tread life over other drive tires that are commercially available, according to the manufacturer.

“If the tires last longer, we can use less material and ultimately (create) less waste then what it takes to haul the same freight today,” added Laferriere. “That’s the goal behind Durable Technologies.”

At the base of the Matrix siping, a raindrop groove is molded into the tread block that reveals a new groove when the tread has 10/32″ remaining, a feature of self-regenerating tread. Due to this self-regenerating mechanism, the XDA5 tire offers renewed grip, enhanced worn traction, as well as more usable tread, which ultimately results in longer life.

“The Matrix siping technology stabilizes the block by allowing the tread to move, but also locking it in place,” said Don Baldwin, product marketing manager with Michelin. “It opens up additional tread patterns as it wears; and we truly believe it’s the last drive tire you will ever have to put on your truck.”

In addition to outlasting other tires, the Michelin XDA5 tire also boasts a footprint more than 10% wider than its predecessor, delivering a larger contact patch and, in turn, superior stability and handling throughout the life of the tire.

Laferriere admitted the new drive tire and its innovative technologies will come at a premium, but was unable to pin down an exact number.

Michelin is confident the technology will prove to be beneficial to end-users and is planning on continuously expanding the product’s offering.

“Our intent is to create between 70% to 80% of our product using this technology by 2011,” noted Laferriere. “It’s something that can be expanded to many different applications.”