Who said Ontario manufacturing is dead?
Mascot bucks the trend with opening of new reman’ plant 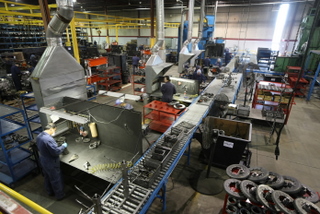 Mascot Truck Parts has made the move to a new, state-of-the-art remanufacturing plant in Mississauga.

MISSISSAUGA, Ont. — Mascot Truck Parts recently merged its three Ontario plants into one – but don’t mistake the consolidation as downsizing.

The parts remanufacturer, which was acquired by ArvinMeritor in December 2007, has moved into a new state-of-the-art, 100,000 sq.-ft. headquarters and remanufacturing plant. Previously, the company had three Mississauga locations and considerable time was spent shuttling people and parts between them.

Glenn Hanthorn, president of Mascot Truck Parts said the company was putting “lots of miles” on cars running between the three plants.

“It wasn’t very efficient,” he said yesterday, during the grand opening of the new location on Admiral Drive. “The consolidation allows for quicker decision-making and reduced cycle-times as well as consistent processes for all products.”

The move has increased production capacity for axle carriers and transmissions by about 20%, the company said.

In the midst of a severe recession and everyday talk about the demise of Ontario’s manufacturing sector, Mascot Truck Parts stands out as a refreshing success story. The new plant is bright, vibrant and most importantly – busy. When the plant was opened to the media Apr. 29, it was humming with activity. Everything from differentials to transmissions and steering gears was being remanufactured at the plant and Hanthorn said so far, no layoffs have been necessary at Mascot.

Mascot’s beginnings can be traced back to the 1930s when it served primarily as an auto wrecker. In the 1960s is began specializing in truck parts and it then evolved into an all-makes remanufacturer. In 1989, it adopted a wholesale strategy that remains in place today, selling to OEMs, independent shops and dealerships.

Since Mascot didn’t compete with its customers by selling direct to the end-user, the company’s strategy allowed it to focus on helping its customers grow their own businesses, Hanthorn explained. The lone exception to the rule is a “repair and return” service offered to owner/operators.

O/Os can bring in a faulty transmission and have it back within a day, Hanthorn explained. “That’s a huge part of our business,” he said. The typical turnaround time for a transmission is just five to six hours, according to the company.

In addition to its Mississauga plant, the company operates remanufacturing facilities in Edmonton, Moncton and Montreal.

The company’s success caught the attention of ArvinMeritor, which saw in Mascot an opportunity to gain a foothold in segments of the aftermarket where it didn’t already have a presence.

Terry Livingston, general manager – North America, for ArvinMeritor’s Commercial Vehicle Aftermarket, was on-hand at the grand opening celebrations. He explained that the all-makes nature of Mascot was appealing.

“We don’t focus only on our own product,” he said. “We focus on other peoples’ products as well, which extends us beyond our own product lines. Our market increased and it let us into revenue cycles that, frankly, we would have been outside of.”

ArvinMeritor has been impressed with the professionalism of the company, which Livingston said will be leveraged across its global operations.

“We want to take the spirit, the knowledge and the expertise we have here and transplant that out to other areas,” said Livingston. “We need the wind in the sails that these guys provide us.”

That’s high praise for a company that remains modest, yet proud of its humble beginnings. Hanthorn admitted he never thought he’d see the day that Mascot was entertaining the media. In an interview that will be aired in an upcoming episode of our WebTV show Transportation Matters, Hanthorn said the ArvinMeritor acquisition was “the best thing that’s ever happened to us.”

The monthly output of Mascot’s new plant is truly impressive: 350-450 transmissions; 640-650 differentials; and 525 steering gears. The company has about 11,000 pieces of equipment available through its network of 30 North American distribution points. The new Mascot headquarters also houses a customer support centre, which handles 500-700 calls per day.