August 18, 2011
NAPA, Cal. -- Freightliner Trucks has set an ambitious goal of improving the fuel efficiency of its flagship Cascadia by 5% every two years. 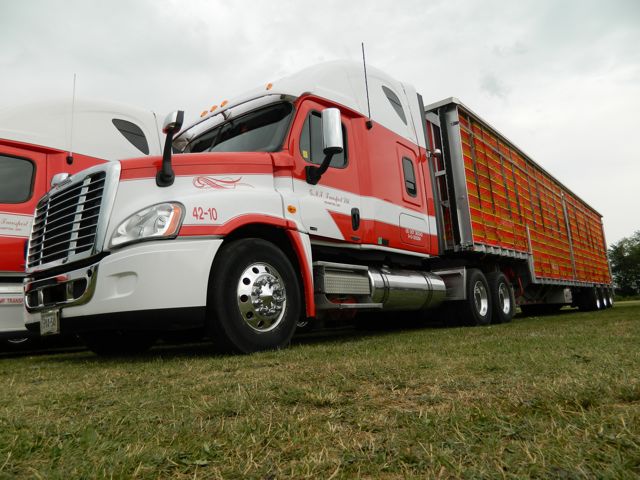 Freightliner says its flagship Cascadia is the most fuel-efficient truck on the road when measured by its own fuel economy testing methodology.

NAPA, Cal. — Freightliner Trucks has set an ambitious goal of improving the fuel efficiency of its flagship Cascadia by 5% every two years.

The company shared some insight on where it stands today and how it will deliver further fuel economy improvements during a recent press briefing here. David Hames, Freightliner’s general manager, marketing and strategy, said the company improved the fuel efficiency of its Cascadia by 5% when introducing its EPA2010 emissions package using selective catalytic reduction (SCR) exhaust aftertreatment, achieving a baseline of 6.7 mpg in typical linehaul operations.

That was improved another 3.5% in 2011 with a recently introduced aerodynamic package including improved chassis fairings. Further enhancements – including everything from a switch to 5W-30 engine oils, predictive technologies, improved drivetrain integration and further aerodynamic improvements – will pave the way to another 15% fuel consumption reduction, improving the Cascadia’s baseline fuel mileage to an impressive 7.9 mpg by 2015, Hames noted.

“It’s an aggressive goal but that’s our target,” he said. “We believe it will keep us ahead of any regulations that are coming our way.”

Hames was referring to the EPA/NHTSA fuel economy standards for heavy trucks, announced recently by US President Barack Obama. Hames said compliance with those standards, to be introduced with 2014 model year trucks will be an “easier hurdle to clear” than previous EPA-driven emissions mandates, which required cleaner burning engine technologies but at the expense of some significant fuel economy degradation.

“We’re not having to go to market with a higher price and lower fuel economy as we have in the past,” Hames noted.

The challenge for truck makers such as Freightliner, will be to increase the “take rates” on aerodynamic options the companies already offer; things such as chassis fairings and low rolling resistance tires.

“And frankly, we want our customers to get the maximum benefit we can provide in terms of fuel economy,” Hames added.

Once all the low hanging fruit has been picked, the next round of fuel-saving advancements will come from further vertical integration, or as Hames prefers, “vehicle integration.”

“How can we optimize the engine with the transmission with predictive technologies on the truck to come up with a total package that’s better than taking a group of components and matching them together as best you can?” Hames noted.

Predictive cruise control is one opportunity to gain further fuel savings, Hames pointed out, “but you have to have an integrated vehicle in order to take advantage of that.”

Freightliner, of course, isn’t the only OEM striving towards ever moving fuel economy goals. All its competitors are as well, and that has prompted the truck maker to take the unusual step of developing its own fuel consumption testing methodology, which it says offers less room for error than any other process that’s in place today.

Convinced that its competitors have programmed their ECM to provide favourable, albeit flawed, fuel consumption data, Freightliner determined a more reliable testing method was required.

“We have some competitors that absolutely have ECM readings that are 8-10% aggressive. They don’t record (DPF) regenerations and they stop idle-time after two to three minutes, so the ECM readings are far from accurate,” said Freightliner’s senior vice-president of sales and marketing, Mark Lampert. “More and more fleets from across North America absolutely understand that and they don’t place a lot of credence in ECM readings.”

Tim Tindall, director of component sales with Detroit Diesel, said even SAE/TMC Type III and IV fuel economy testing methodology – accepted by industry as the gold standard – is not sufficiently accurate. A TMC Type IV test, for instance, requires a minimum run of 200 miles. But Tindall said the results can be skewed if one engine experiences a DPF regeneration along that route while the other does not.

Tindall also pointed out the SAE/TMC tests call for the fuel tanks to be weighed before and after each run, so there’s no way to exclude fuel burned during acceleration and deceleration, which can vary widely between drivers. Freightliner’s and Detroit Diesel’s shared parent company Daimler Trucks North America (DTNA) has solved this problem by developing its own procedures, which use flow meters to measure the fuel consumed only when the trucks are travelling at highway speeds. It has also extended the route to 435 miles, ensuring a DPF regeneration is required. Other parameters are borrowed from the existing SAE/TMC Type III and IV protocols. In the end, DTNA’s fuel consumption test is the “most complex” and most accurate method in existence, Tindall claimed.

Tests are conducted on the track as well as along a 435-mile route between Portland and Pendleton, Ore. Dedicated drivers are put behind the wheel, each with more than 100,000 miles of fuel economy testing experience this year alone, Tindall added.

The results? “We are convinced we are the industry leader in fuel consumption,” Tindall said, noting the Freightliner Cascadia is 3-5% better than its nearest competitors using Daimler’s comprehensive comparison testing methodology.

“When we have run this test, we have not lost a single fuel economy testing measurement to any vehicle in any configuration,” Lampert added in an interview with Trucknews.com. “In equal conditions, we absolutely have the most fuel efficient package that’s out there.”

Fleet customers that are skeptical based on their own fuel consumption findings are invited to contact Daimler to arrange a head-to-head test using the fleet’s own equipment. The company is confident that the Freightliner Cascadia will come out on top.

“Our strategy is to report the numbers as accurately as possible,” Tindall said. “And we are certain we’re going to be in a position to maintain the fuel economy leadership position we have in place today.”

VIDEO: Click here to see Freightliner’s Mark Lampert discuss how the company is dealing with economic uncertainty and a shortage of components.