DENTON, Texas – Peterbilt has announced it has delivered a Model 579EV to Werner Enterprises, where it’ll be put into service as part of the fleet’s battery-electric truck pilot program.

“Werner Enterprises has long been regarded as an industry pioneer, and Peterbilt is honored to partner with them and have our 579EV lead their electric operations,” said Jason Skoog, Paccar vice-president and Peterbilt general manager.

The truck uses a TransPower energy storage subsystem with a capacity of 352 kWh. It’s driven by a Meritor Blue Horizon mid-ship motor drive subsystem with up to 430 hp and an estimated range of about 150 miles. Fast-charging takes as little as an hour, Peterbilt claims.

“Werner is committed to finding alternative ways to keep our trucks environmentally-friendly while staying at the front edge of technology,” said Werner Enterprises president and CEO Derek Leathers. “Now, we’re excited about putting on some real-world miles with a dedicated customer in southern California over the next year.”

Peterbilt says its 579EV will be available on its SmartSpec sales tool in the second half of 2020. 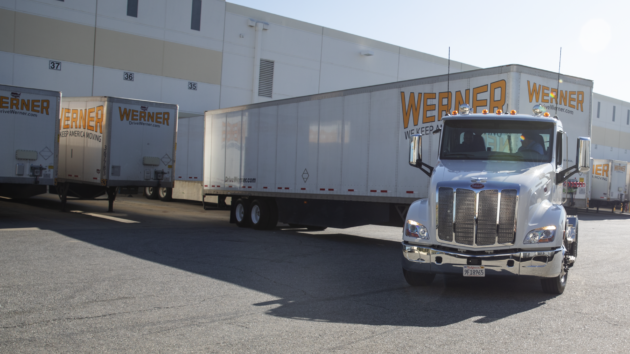