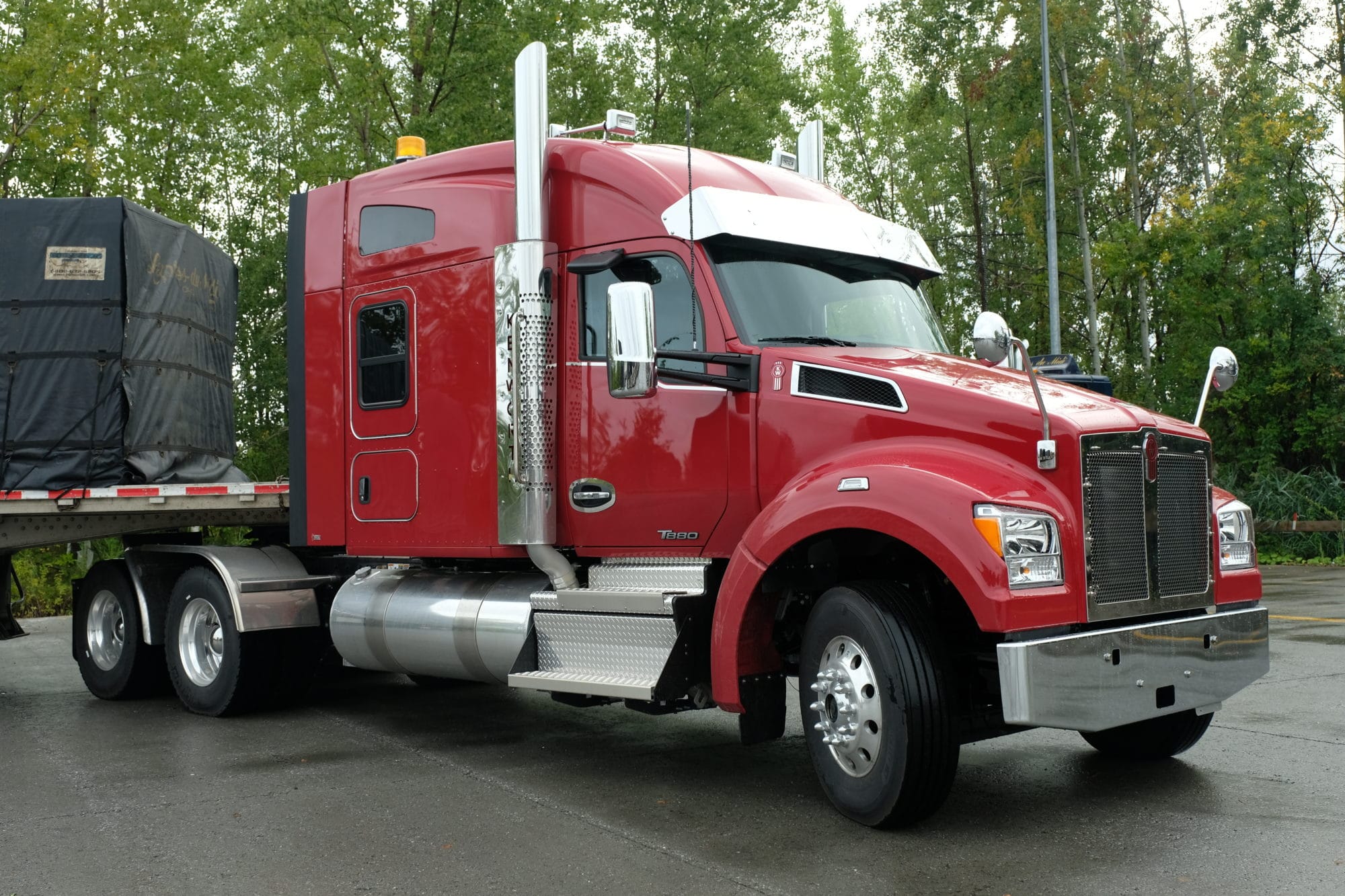 MONTREAL, Que. — While walking the grounds of a small truck show earlier this summer, I spotted this gorgeous red Kenworth along one of the rows of trucks and immediately did a double take. It wasn’t the big 76-inch sleeper that caught my eye, but the set-forward steer axle and squat brawny frontal profile of a T880S. Kenworth offers the T880S variant as a vocational chassis mostly for heavy operators like those in the ready-mix sector who need the extra few inches of axle spacing to meet bridge law requirements in some American states.

I didn’t expect to see one here in Canada and I really didn’t expect to see one equipped with a 76-inch sleeper, rigged for on-highway operation. Kenworth says there are only a couple like it and they are both believed to be in Quebec. It’s not often we get what reporters call a scoop on a test drive story, but this test drive is just that: it’s the first time you’ll read about this unique package that I’m predicting soon won’t be so unique. I, and Daniel Paquette, the business development manager at Kenworth Montreal who spec’d the truck, think this will become a popular alternative to the T680 and T880 in some of the more severe Canadian applications where aerodynamics takes a back seat to ruggedness.

It was spec’d for a potential tank-hauling customer. Tank trailers typically have a shallow king pin setting, as did the four-axle flatdeck trailer we tested the truck with in Montreal in mid-September. We axle-weighed the load before we left the yard and got the following results — steer axle, 5,120 kg; drive axles, 16,200 kg; trailer axles, 30,820 kg. We were comfortably under the limits all around, but a set-back steer axle might have scaled a bit heavier.

According to Paquette, the main reason for putting that truck together was that folks just like the look of the thing. He says he had several requests from his customers to bring one into Montreal so they could have a closer look. “They like the tough, brawny look of the short hood and the set-forward axle,” he told me.

I can’t say I disagree Paquette’s customers. (And a thank-you is in order here to Pierre Aubin of L’Express du Midi of Ste-Catherine, Que., for loaning us the flatdeck load of drywall for the test drive. It was a real treat to get a Canadian-weight load to test drive a Canadian-weight truck.)

As highway trucks go, this one is a curious mix of rugged and comfortable. It’s spec’d with most of the top-of-the-line driver comfort items like the Diamond VIT interior, swiveling passenger seat and swing-out table, drawer-type fridge, and wiring for a microwave and an inverter. It has the Extreme Temp insulation package as well as a cab heater. Up front we get the full gauge package, and premium seats. In short, just about everything a well-appointed over-the-road truck would have. And under all that is a robust chassis where the heavier components are closer to the top of the list in the data book, like the 2,132,000-lb. RBM frame, heavy-duty crossmembers, 14,600-lb. front suspension, and a 46,000-lb. rear suspension with heavy-duty air springs.

The truck is powered by a Paccar MX13 engine cranking out a whopping 510 hp and 1,850 lb-ft of torque. Paquette told me that many of his customers who run loads similar to our test load and even larger B-train loads prefer the 545- and 600-hp Cummins X15 engines with 2,050 lb-ft of torque, but engineering can’t squeeze a red engine beneath the short T880S hood. Still, with it’s million-mile B10 life, two-year, 400,000 km warranty, and a 300-lb. slimmer profile, the MX13 offers a lot in return for what it gives up.

Our test drive took us over the Mercier Bridge, and the new bridge over the Beauharnois Canal on Autoroute 30. Both bridges have pretty good grades and forced me to downshift with the MX13, but I suspect I’d have to make that downshift even with the beefier 15-liter engine. The 18-speed transmission gives the driver plenty of latitude to keep the engine where you want it for road speed and torque.

Two features of the T880S struck me before we had even left L’Express du Midi’s yard: the maneuverability and the visibility. From the driver’s seat the hood is almost invisible. That provides unprecedented visibility close to the hood, where pedestrians, bicycles and small cars like to hide. The top of the hood at the center is barely chest high, so anyone over four feet tall would be easily seen by the driver. On the right side, just ahead of the A pillar where tall flat hoods and air cleaners once lived, the view down to the side is very good. At a light with a car sitting alongside, the roof was hidden behind the pillar, but the hood and trunk were clearly visible. Score another point for the short, slanted hood.

The wheel cut was a bit shy of 50 degrees, Paquette says, owing to the bulkier-than-usual TRW TAS 85 steering box, which is rated for 16,000 lb. It provided wonderfully solid steering at low speeds and out on the highway. My personal feeling is that set-back steer axles can wander a little, but this set-forward axle tracked the lanes like the truck was on rails. Construction on the Mercier Bridge has the lanes narrowed to about 10 feet, so precise steering was pretty welcome there. I tracked right across the bridge about six inches from the barriers on the right with no stress at all. Importantly, I don’t think Paquette was terribly worried either, sitting on the right-hand side and looking out over the abyss.

Being a Kenworth, the interior was remarkably quiet. There was no wind noise coming in from around the doors, the engine and transmission noise — aside from those annoying grinding sounds that came up every now and then — was very tame, and even pleasant. It’s funny how fast you get used to some things. Most of the trucks I’ve driven lately have had downsped powertrains, meaning that engine speed at 105 km/h is in the 1,200 rpm range. This truck, with it’s 3.91:1 axle ratio, clearly spec’d for Quebec’s higher weight allowances, was turning about 1,450 at 95 km/h. It seemed fast to me, but that put it right at the upper limit of the MX13’s peak torque band (1,000-1,450 rpm). Given the weight we were pulling, I had to move fast to downshift as it began slipping down lower in the torque band. You lose momentum pretty quickly on a 3% grade at a gross weight of 51,000 kg.

In those harder pulls, a rather noisy engine fan spoiled the atmosphere a couple of times. The truck has a 1,330 square-inch rad and a Horton on/off fan, which was obviously adequate for most of the driving we did. Maybe I’m just too used to the light American loads where engines don’t even break a sweat.

I’ve saved the best for last here. The ride quality of this truck was sublime. The quality of the ride with the trailer on was unassailable — as solid and sure-footed as you’d expect, but more so. We had to bobtail from Kenworth’s headquarters in Saint-Laurent over to Ste.-Catharine to grab the trailer. That route takes you over some pretty rotten roads, but the suspension really took them in stride. I’m not enough of an engineer to explain it, but I put it down to having the suspension points at the extreme ends of the chassis — there’s no overhanging weight to keep the springs bouncing. It could also be the heavy front and rear suspensions, which you might be inclined to think would provide a rougher ride. I’d call it a stiff ride, but as smooth as I’ve ever felt in a big truck on deteriorating highways.

As well, the cab suspension air springs and shocks sit six to eight inches outboard of the frame rails. That wide stance helps discourage cab sway, which can also lead to a wandering steering wheel.

It may sound like I’m gushing about this T880S, but I’m not. There’s a lot of good stuff going on here, such as the large rear deck with wide unobstructed access from the right and left sides, even though it sits on a relatively tight 244-inch wheelbase. Or the ease of opening the hood, and the vast amount of space technicians have once they get around the set-forward front wheel.

It was a pleasure driving this fairly unique truck for a few hours, and as I indicated earlier, I think we’ll soon see many more of these on Canadian highways. For fans of set-forward axle tractors, it’s a really nice compromise from the long-hood W900. And other people will tell you, it’s just got a certain look