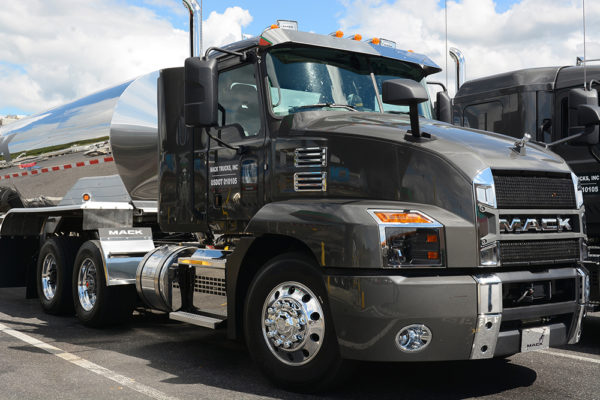 Mack has traditionally been pretty conservative with its truck styling, but the new Anthem model puts boots to that notion. Not since Navistar tapped into the retro vein with its Lonestar back in 2008 has a truck maker put forward such a striking and highly styled truck. Comparatively speaking, the Anthem is New York Italian-style cheesecake to the vanilla-pudding Pinnacle it replaces.

Mack’s share of the longhaul segment has been in single digits for some time, in part because of its aging and uninspiring Pinnacle model. With the recent releases of some pretty flashy iron from other manufacturers, Mack really had to up its game. The company has done so in spectacular fashion. I doubt there will be many tears shed the day the last axle-back Pinnacle drives off the Lehigh Valley assembly line in Macungie, Pennsylvania.

The Anthem comes three years into Mack’s extensive rebranding crusade and may represent the “pinnacle” of those efforts. Roy Horton, Mack’s director of product strategy, says the focus over the past three years has been to deliver products that bring value to customers’ top concerns.

“Fuel economy continues to top the list of challenge fleets,” Horton said during post-launch media presentations. “Driver recruitment and retention remains a critical concern, and then there’s uptime and the overall total cost of ownership. We put all those concerns front and center with the Anthem.”

Anthem addresses those design imperatives with flashy ­styling that will certainly appeal to a good chunk of the driver population, along with an efficient powertrain, significant gains in aerodynamic efficiency, and new connectivity packages intended to improve fleet uptime and lower operating costs. Mack stayed with a proven chassis and driveline for the Anthem, and the basic cab structure and doors haven’t changed.

What has changed is blindingly obvious.

With many of today’s highway tractors taking on a similar and familiar shape, albeit with unique styling cues, Mack’s Anthem really stands out from the crowd. With its bright metal accents around the headlights and grille, the large squared-off fenders and the iconic bulldog hood ornament (even these are under aerodynamic pressure these days), are in contrast to jelly-bean truck shapes.

Drivers will take to this truck because of its looks, but once they are in the door they’ll discover the beauty runs more than skin deep. The interior has been totally revamped with a new dash layout, new trim options, and a few new control interfaces. The sleeper interiors are new as well, and Mack now offers a stand-up area within the dimensions of the cab. Drivers no longer need to duck when sliding out of the driver’s seat and heading for the bunk.

The five-year design project that became the Anthem began with the premise that the truck had to look like a Mack and be aerodynamic. If you look closely, you can see where some of those gains might be realized. The big square fenders are swept back at the front and the headlights nestle into a 45-degree cut. The hood contour is more steeply sloped than the Pinnacle’s, and the top rear edge has a flair to help sweep the air up the windshield and onto the doors.

The bumper includes covered tow-hook ports, a lower air dam, and a close-out flange between it and the hood for better air flow. An optional sunvisor is aerodynamically neutral, and the tall roof on the 70-inch sleeper model is smooth and includes a tab at the back to help guide air over the front edge of the trailer.

There’s little else you can call subtle about the Anthem.

The hood and bumper are each three-piece designs for ease of repair, and the hood and side mirrors are both breakaway-style. The placement of the optional hood mirrors seems a bit odd when you’re standing on the curb looking at them, but they are in just the right place when viewed from the driver’s seat. Mack says they are designed like that to help with the airflow around the main mirrors.

The Anthem comes with two styling choices, lots of chrome, and bright trim around the grille, fenders, and headlights. Or none at all. Maybe there’s some middle ground available, but I prefer the sleek look of the black trim. There’s even a Black Dog trim that features a black paint scheme, black wheels, half-fenders for the drive wheels, and black “MACK” across the front of the grille. That particular truck seemed to be the most popular with the folks who stopped to look during our two-day test drive.

The interior has been vastly modernized. Among the changes from old Pinnacle dash is a repositioned mDrive selector. It’s now much closer to the driver and down lower on the dash. There are DIN-ports in the dash for various bits of equipment like the seven-inch infotainment touchscreen display, an Electronic Logging Device, or storage slots. Atop the dash is a clever smartphone holder that keeps the phone in place on a horizontal axis, and has a neat little cable trough and a nearby USB power port so you won’t have wires dangling all over the dash. There are about half a dozen USB ports around the truck, so finding a power outlet should be much less of a problem than with earlier models.

The A-panel is all new, too. While quite striking, it’s functional and easy to look at. It features large tachometer and speedometer displays with crisp lettering and LED back light for a sharp white appearance. The six standard gauges, oil and water temp, fuel and DEF levels, and primary and secondary air pressure gauges, have a distinctly automotive look. Between the tach and the speedo is nestled the five-inch Mack Co-Pilot display. It’s home to dozens of driver-programmable screens with everything the drivers needs to know about the truck and trip.

There are two sleeper options for the Anthem: a 42-inch flat-top and a 70-inch stand-up model that offers an optional upper bunk for team operations. The stand-up model is one of the nicest ­sleepers Mack has ever offered, with up to 27 cubic feet of storage in the premium model. The interior height directly behind the driver’s seat is just shy of seven feet. There are cupboards, cubby holes, cabinets, and shelves everywhere you look, from right above the driver’s head and all the way across the back wall of the sleeper. And there’s still room for a fridge, desk, flat-screen TV mount, a 52-quart ­capacity fridge with a slide-out drawer, and ­microwave cabinet.

In what’s becoming a bit of a rarity these days, we had two full days in the truck, covering about 1,300 kilometers from Allentown, Pennsylvania, to the Mack dealership in Duluth, Georgia. There were 10 trucks in the convoy and only seven reporters along, so we did a fair bit of slip-seating to get a taste of everything Mack had to offer.

I spent the majority of the time in a pair of day cabs – first the premium-spec’ 6×2 model with an MP7-425e 425 ­horsepower, 1,560/1360 lb-ft engine pulling a tank loaded to very close or even a little over 79,000 pounds. The other was the “economy” model, with the lower-end interior, likely destined for work in a city Pickup and Delivery, or local operation. It had the same engine, but taller gears and a much lighter load.

When you can spend 800 kilometers in a day cab a still feel like you want more, the truck maker did something right. It’s spectacularly quiet inside, for one thing, and the new premium Sears seating Mack uses is butt-hugglingly comfortable.

I found the new dash layout functional and easy to navigate, with all the stuff I needed within easy reach. It was nearly dark by the time we pulled into Greensboro at the end of the first leg of the trip, so I saw the dash in night-lighting trim, and got to see how good the new LED headlights are. Winners, both.

There’s a new hood latch to mention: it’s under the grille at the center of the hood. It’s a bit tricky to find at first, but one yank and the hood all but pops up by itself. It’s on a counter spring to help with the lifting. Because there are cables and latches involved, one hopes they will last the life of the truck.

Since many of the changes to the Anthem are cosmetic, it’s hard to say how they impacted the ride and handling, which was up to Mack’s previous high standards.

I think Mack has produced a truck that will have broad driver and fleet appeal. The styling is certainly a departure for Mack, and a welcome one. Judging by the crowds that gathered each time the convoy pulled into a truck stop or rest area, I’d say Mack has tapped nicely into drivers’ sense of style. I don’t recall hearing a single negative comment about the truck. Given how typically polarized we’ve become, I think it’s fair to say that Mack will soon see its share of the longhaul market start to grow.