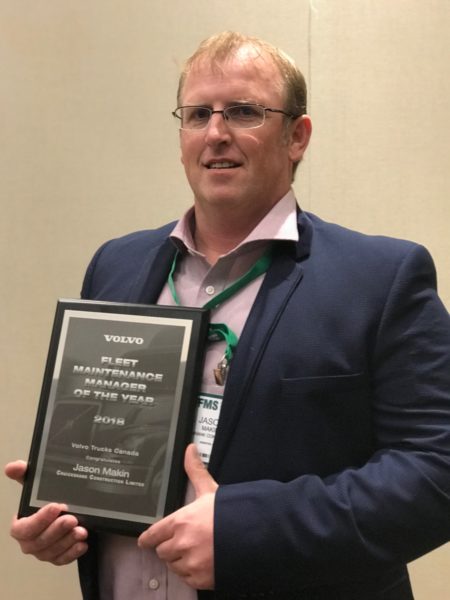 Nine years ago, after a career as a technician with the Canadian Forces followed by some time at Toyota Motor Company, Makin and his wife decided to return to their hometown in Eastern Ontario. He took a job as the fleet maintenance manager with Cruickshank Construction.

Although Makin knew he was nominated for the honor, the award was meant to be a surprise to its winner until the moment his named was announced. When he reached the stage Makin said he was suspicious when he saw his son – also a technician – at CFMS, but his wife was a dead giveaway.

The die-hard Leafs fan says it was a learning curve returning to truck maintenance on the Cruickshank fleet after spending years at the Toyota plant, but he says he wouldn’t do anything else.

Leading by example and with his trademark sense of humor, Cruickshank technicians say the manager creates a positive work environment by making them feel cared for on the job.

Fleet owner Steve Cruickshank said there was no one more deserving of the award than Makin.

Grateful for the support, Makin says he feels lucky that he could work in a job doing what he likes, while living in a place that he loves.