Are you ready for black aluminum wheels? Alcoa is dipping its foot into Detroit auto culture to see if there’s enough interest in a black Dura-Bright wheel for trucks. Many of the full-size North American pickup trucks now offer black wheels as an option, and the company believes there’s is significant interest in the black Detroit look to warrant producing such a wheel for trucks.

“I think every single person who owns or drives a truck takes pride in their equipment,” said Mike Baird, national sales manager at Arconic Wheel and Transportation Products, which makes Alcoa wheels. “Many of them are now seeking a different look or style from the traditional chrome and polished aluminum look.” 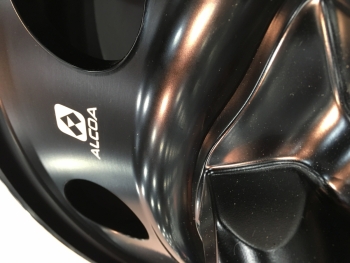 Baird says the older crowd, the baby-boomers if you will, still prefer the traditional look of polished aluminum, chrome, and stainless steel, while younger drivers are looking for something different. “You could call it styling from Detroit,” he explained. “I believe there’s a market out there for a group of truck owners that want something different, but also want the light weight and corrosion resistance of aluminum.”

Alcoa is looking at the potential of producing a black version of the Dura-Bright Evo wheel. It can be done and the company has a few prototypes, several of which were subtly on display at this year’s Mid-America Trucking Show. They were hanging at the back of the booth where they weren’t immediately obvious. According to Baird, the company was trying to see if people noticed them and asked about them.

“And they did,” he said. “We’re now trying to determine if there’s enough of a market to justify making a black Dura-Bright wheel.”

Dura-Bright is not a clear-coat type of product and it’s not paint. It’s actually a treatment that embeds itself in the surface of the wheel. Making a black wheel requires a significant and capital-intensive change in the production process.

“If you cut a cross-section out of a black Dura-Bright wheel, the aluminum material on the inside would look like normal aluminum,” Baird explained, “but you’d also see a very thin layer of black at the surface.”

Baird said there are no specific advantages except the styling. For those to whom style is important, the aluminum obviously offers the corrosion resistance a steel wheel cannot deliver. “The fact that it’s a Dura-Bright wheel also means they will never need to polish it or paint it,” he says.

Alcoa is doing a market survey now on social media. Baird said there have been lots of comments on the idea, both for and against.

“The older crowd are saying things like ‘If it don’t shine it ain’t mine,’ while our younger Facebook followers are saying ‘bring it on,'” Baird noted.

What do you think? Are there black wheels in your future? Let Alcoa know what you think by going to the Alcoa Facebook page and taking the really short survey.