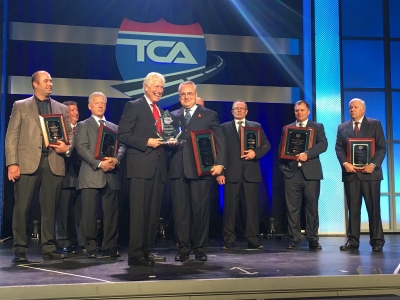 The awards are given to companies who display an unparalleled commitment to safety. Divisional winners were divided into six categories defined by miles driven. Those companies were then invited to compete for one of two grand prizes, one for carriers with annual mileage below 25 million miles and the other for companies that accumulate over 25 million miles.

Companies competing for the award have the lowest accident frequency ratios per million miles annually.

In addition to ranking first in the sixth division (fleets with over 100 million miles annually), Bison Transport took home the grand prize for the large carrier category for the seventh time in a row.

Patrick Kuehl of Great West Casualty Company said Bison’s safety program was an amazing blend of safety initiatives and put safety at the forefront of everything the carrier does.

“On behalf of our executive management team and all of our employees and contractors, I’d like to thank the TCA,” said Garth Pitzel, director of safety and driver development at Bison Transport.

“Our owner-operator of the year talked about the value of people earlier. That’s really the foundation that our programs are built on and we’re absolutely fortunate that we have 2,500 people believing, supporting and executing that in their daily actions.”

Kuehl said as a small carrier, Big Freight is seen as an innovative service partner, rated tops in both safety and customer satisfaction as defined by their clients.

Gary Coleman took to the stage to accept the award.

“I accept this award on behalf the guys that really make it all happen, the operations team and our drivers,” said Coleman, president and CEO of Big Freight Transport. “It’s a tough gig.”

Coleman said he was very excited to bring the award home and share the recognition received by the TCA.