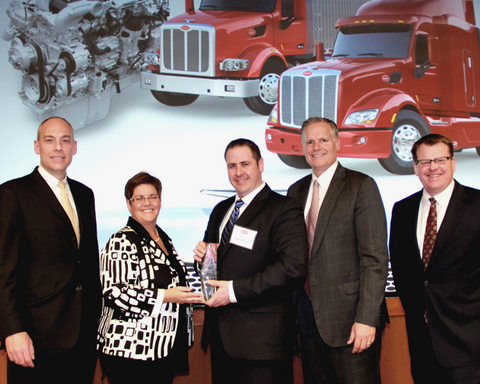 “We are committed to providing every customer with the best possible service and support throughout the life of their vehicles,” said Nicole Lussier. “We invest in the technologies, tools and personnel that set us apart and allow us to help customers maximize their uptime and minimize their costs.”

The dealership achieved top scores in every Standards of Excellence category. It had the highest parts and service financial score and achieved an excellent absorption rate, according to Peterbilt general manager and Paccar vice-president Bill Kozek.

“The service area of Camions Excellence Peterbilt – Laval is always full and they are well known as the best shop in the area,” Kozek said. “They embrace all available training, the full parts catalogues of TRP and Paccar Parts, and the MX-13 engine. They have a fiercely loyal customer base who knows that they will be treated professionally, fairly and quickly.”

“The team at Camions Excellence Peterbilt – Laval is known for superior support of Peterbilt trucks and the PACCAR MX-13 engine,” said Darrin Siver, Paccar vice-president and Paccar Parts general manager. “They maintain an outstanding parts inventory and are dedicated to excellent customer service.”