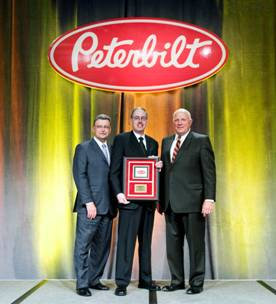 Peterbilt of Springfield was named North American Dealer of the Year, but Peterbilt Manitoba was a finalist and one of only four ‘Best in Class’ award winners. Doug Danylchuk is the dealer principal of Peterbilt Manitoba. Best in Class winners are judged on market share, goal achievement and financial management.

“Peterbilt Ontario Truck Centres has done an exemplary job of representing Peterbilt’s medium-duty line of trucks,” said Bill Jackson, Peterbilt general manager and Paccar vice-president. “The London team has been very successful in selling and supporting the entire medium-duty product line to a full range of applications such as utility, pick-up and delivery, and towing and recovery. We are proud of their growth and accomplishments in the Ontario market.”

The Truck Care Dealer of the Year, won by Peterbilt Pacific Abbotsford, was awarded based on the dealership’s service excellence and full array of Truck Care programs, according to the company.

The dealer has five locations in B.C. and is headed by dealer principal Don Pasiuk. The Abbotsford location consistently ranks highest in overall customer satisfaction, according to the company.

“The level of service that Peterbilt Pacific in Abbotsford provides is outstanding,” said Peterbilt’s Jackson. “The dealership demonstrates true value to the customer of a Peterbilt service facility, and supports and delivers upon the Truck Care program of services. This includes their dedication to our 24-hour service and support, QuickCare Services, and loyalty card program to name a few.”

Peterbilt also named 24 recipients of its Platinum Oval Award, which recognizes “outstanding performance in the Peterbilt Standards of Excellence Program.”