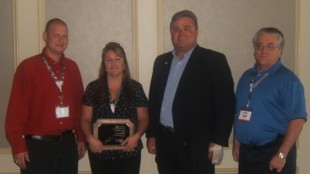 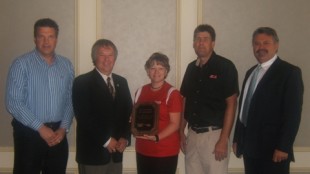 Winner of OTR SelecTrucks of Canada Canadian Retention Award in the More than 100 Power Units category. In photo: Tom Boehler, Dave Dietrich, Laura Quinn, Randy Steckly, all of The Erb Group of Companies. 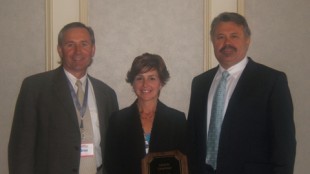 Liberty Linehaul of Ayr, Ont. won in the Fewer than 100 Power Units category. In presenting the award, SelecTrucks of Canada manager Nevio Turchet pointed to the company’s commitment to maintaining its strict hiring criteria and commitment to home time and family as reasons behind the company’s retention success. Liberty Linehaul president Brian Taylor and human resources manager Theresa Barclay accepted the award on behalf of the company.

The award in the 100 Power Units or More Category was presented to the Erb Group of Companies of New Hamburg, Ont.

In presenting the award Turchet commented, “This company’s retention efforts begin with effective recruiting and continue through the driver’s time with the company, including an excellent and thorough driver orientation program and family involvement programs that are like no other. They take extra steps to let their drivers know that they are appreciated such as their ‘best doctor’s’ service (a service which helps their drivers stop smoking), and their Sup-Erb awards program which recognizes their drivers for their accomplishments and performance.”

Dave Dietrich accepted the award on behalf of the Erb Group, which previously won the award in 2005.

Also honoured at the event was Niki Brown, dispatcher for Elgin Motor Freight of London, Ont., who was presented with the 2008 OTR/KRTS Canadian Dispatcher of the Year Award.

The award recognizes an outstanding individual working in the field of dispatch and is presented annually to the dispatcher who best demonstrates a commitment to customer service, safety, driver well being, courtesy, teamwork and problem solving.

In presenting the award, KRTS president Kim Richardson said, “This year’s winner continues this award’s tradition of exemplifying dispatching excellence. In a letter of nomination, her supervisor writes, ‘There is nothing I can say about her that would accurately reflect what she means to our company. She builds relationships with her drivers that last a lifetime. At our company we pride ourselves on treating others as we wish to be treated and nobody is a better representative of this than she is. She has a great knowledge of the industry and uses that knowledge to help everything run smoothly. Her drivers appreciate her, her co-workers appreciate her, and I appreciate her.'”

Brown is the second consecutive female to win the award.