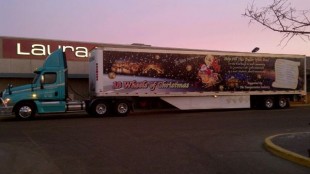 The 18 Wheels of Christmas tractor-trailer. 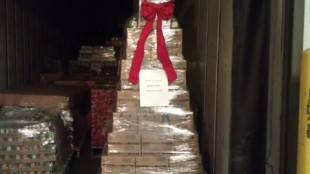 18 Wheels of Christmas volunteers get creative with a stack of donations.


CALGARY, Alta. — The ninth annual 18 Wheels of Christmas campaign collected more than 100,000 lbs of donations for local food banks this past Christmas season.

This year’s campaign kicked off with K97 FM radio host Terry Evans literally living in the 53-foot trailer in Edmonton until enough food was collected to force him out the rear doors. It took four days to reach the goal, allowing Evans to take his sleeping bag and abandon his trailer home, organizers told Trucknews.com.

Edmonton alone collected 60,000 lbs of food as part of the Christmas food drive, which calls on folks in the transportation industry to donate cash or food, which is then donated to their local food bank. The event is coordinated by Rosenau Transport, which donates a specially decorated 53-ft. trailer to the effort.

For their part Saskatoon-area donors contributed 15,600 lbs of food.

“This donation ensures that we can meet people’s needs in the coming months. We could not be more please with 18 Wheels of Christmas, their supporters and donors, tremendous show of support for the community,” said Laurie O’Connor, interim CEO of the Food Bank and Learning Centre.

Sparwood, B.C. represented the smallest community to take part, yet still contributed more than $2,900 in cash donations, organizers say. Those funds were given to the Sparwood Food Bank for the purchase of food and supplies.

This year marked the first time Regina and Brandon were involved in the campaign.

And Calgary, home of the original 18 Wheels of Christmas, raised about 30,000 lbs of food in large part due to the donations of Fluor Canada and the Fluor Cares committee. It raised $3,300 in cash and 1,650 lbs of food all on its own.

Event organizer and co-founder Colleen Nickel told Trucknews.com the trailer will carry the names of donors and will be put back into regular service until the next Christmas campaign.