PEORIA, Ill. – With its slab-fronted, unadorned styling the new Caterpillar CT681 won’t win any beauty contests, but that’s not its purpose in life. The truck is meant to be an urban, vocational workhorse and according to the company, every design element was created with that goal in mind. 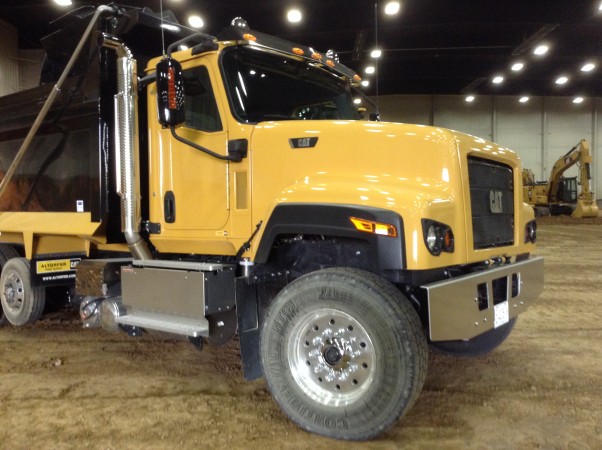 “Customers in the trucking industry aren’t bashful in telling you what they want. They were clear. They said, ‘I don’t want the fancy stuff. Give me something durable. Give me less pieces. Let me not worry about getting a scratch.’ It was a complete surprise to us,” said Dave Schmitz, global on-highway truck product manager.

The CT681 is a short-nosed truck with a set-forward axle. It’s a truck that Caterpillar expects to see laden with dump beds, snow plows and cement mixers. It’s also a truck that should perform well in tight city environments, because of its axle positioning.

“Your set forward, long nose truck is very popular in the West because of the comfort. It’s going to be found in a wider variety of applications from logging to bottom dumps and side dumps. The short-nosed is completely focused on the eastern market,” said Schmitz.

In particular, operators who work in jurisdictions where there is a strictly enforced bridge formula are expected to make up a large market segment for this truck because of how it was designed, according to Caterpillar.

“When you have a bridge formula there is a lot of space to measure from that bumper to that centre line of the axle, which we call B2A, bumper to axle. It is typically designed for under 30 inches—29.5 inches. They said ‘we run into inspectors that don’t set up their measurements properly. Make sure you hit that formula.’ We brought it down to an industry best 28 inches  We made sure that front bumper was flat. It had to be flat, so that they’re not taking their tape measure and putting it at the wrong spot on the bumper when they make that measurement, so the companies don’t get ticketed because of the opinion of how far the B2A is.

“We also did small things like the tow hooks in the front. We made them flexible and able to be turned in so when the measurement is taken, the measurement from the front bumper doesn’t take into account the tow hooks. The two hooks either fold in or they are sitting on the side of the rail and you take them off and detach them when you are not in full load.”

“We said we have to hit certain features. We’ve got to be able to put a snow plow on the front. And keep the product durable. So we went with a 12 inch frame. We knew if we went to a 10 inch frame all we’re looking at is putting on more weight, more steel, etc., to keep that thing durable and reliable. Customers keep these trucks 10-12 years. With linehaul, it’s four to five, and then they turn them over to somebody else. [Vocational operators] want to run for a lot more years. We made sure the front frame extension off the front–that’s the amount you put the snow plow on—is integrated in rail. It’s not a bolt-on. Any time you bring in a joint you open up opportunity for durability challenges, so we made sure it was a true front-frame extension where the rails went right out through the front. By doing that we also had to have the radiator on top of the rails. On our CT660 we have a bracket that drops down below the rails into the radiator. You can have the nose be extremely sloped. On this one, we wanted to have the front frame rail extension so we put the radiator on top. So it’s all about function,” he said.

“The grill needs to stay with the radiator so it opens up the access. We didn’t want to run the grill into the pump you have to put on the front, or in the case of a snow plow those linkages in the front too. Combine that with the requirement to keep not just the bumper but the front end flat, and you start stacking up those other things, it starts to complicate things. Not to mention the radiator we put above the rail–that played a little bit with the height. Customers say I have it covered up anyways when I put a snowplow on it, it makes no difference.”

Additionally, by having the front frame rail extension, it gives Caterpillar the ability to include a front-engine PTO.

According to Schmitz, one of the advantages of the way the front end was designed was that there is a lot of space in the engine compartment, making it easy for a mechanic to perform top-end overhauls or to change sensors, without having to pull the engine.

While there is a variety of engine configuration options on the CT681, there are also a number of common features that Caterpillar emphasized when presenting the truck. Schmitz spoke about not just the construction of the engines but also of some of their features.

The base of all of the engines is what the company describes as a “compacted, iron graphic block” which Schmitz said not only saves about 200 lb. of weight, compared with a typical iron block, but also cuts noise by about 30% versus engines built with more traditional materials.

“They have high pressure common rail fuel system with 32,000 PSI of fuel pressure. This gives you that natural burn, that better burn. It helps on both the power and on the emissions, as we have emission control devices on the truck. There are also dual turbo chargers, low side and high side, so when the engine is at a lower speed it is depending on one turbo. When it gets to a higher speed it depends on the other. Add that flexibility. You have that constant torque curve throughout the engine operation.

“We do have an SCR system on the truck. It’s a highly efficient SCR system combined with recirculation. We do a nice combination, balance of the two, to make sure it is not consuming too much DEF, and to make sure we have the power. It’s a nice balancing act.” 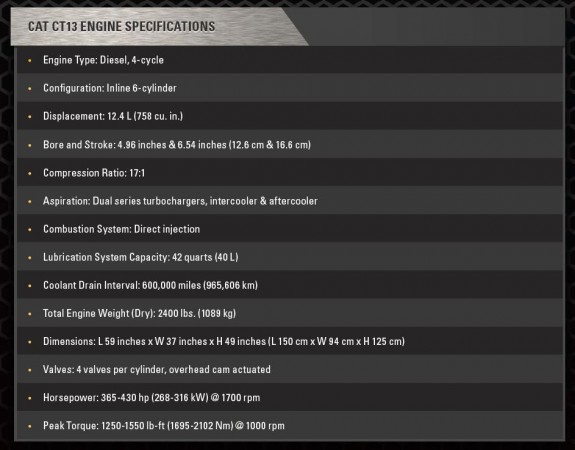 As far as transmissions go, again Caterpillar is giving buyers a choice, including Eaton UltraShifts, but the company’s preference seems pretty obvious: the six speed automatic CX31, which is integrated with the engine.

“It is a full power shift. That means in between gears you still have power to the road. Automated manuals don’t have that. Other automatic transmissions don’t have that. You have constant power, so you are not wasting fuel, you are not having to recover and if you are up a hill with a heavy load, you have a nice smooth carry.”

According to Schmitz, it’s not just Caterpillar executives and employees who like the CX31, so do more and more of the company’s customers.

“I know on the Caterpillar truck line as of right now, over 50% of our trucks are going out with that CX31 transmission.”

The CT681 offers paver brakes on the back and parabolic taper leafs (which are also now available on the CT660) that Schmitz says “give you that real nice ride, unloaded. When you do put a load on the front end, they are compressed and turn into a different style of shock. You’ve got a nice ride both when you’re unloaded and when you are loaded.”

Caterpillar said the cab in the CT 681 is essentially the same as the CT660’s cabin in terms of design, complete with storage caddies on the top of the dash and a clipboard/book slot in place of the glove box. The CT681 has a leather-wrapped, tilting, adjustable, telescoping steering wheel as standard, and the same wheel is in the CT660. New to the CT681 and also now available on the CT660 is an air filter designed to eliminate fine concrete dust from the cabin. Heated mirrors are standard equipment, so is what the company describes as a premium sound insulation package.

Schmitz explained the instrument cluster features one large centre gauge that acts as both the speedometer and tachometer, “so when you’re driving you only have to look at one spot, you don’t have to look at two different spot. You look at one spot to see your speed and your RPM, especially for those trucks with manual transmissions.” 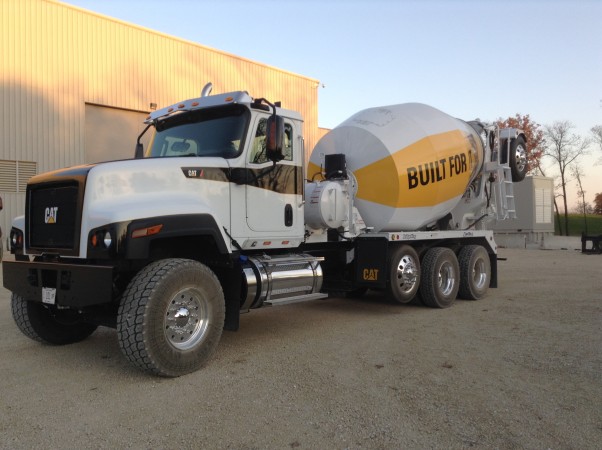 All of the CT681s come standard with CAT’s Product Link telematics system. When paired with the company’s VisionLink Web interface, fleet managers will be able to monitor all aspects of the trucks’ operating conditions and are even able to set alerts if a truck has been moved outside of a prescribed boundary area. Alerts can also be sent to technicians or Caterpillar repair shops when engine codes appear, giving maintenance experts the ability to remotely diagnose what problems have occurred wth the vehicles.

Schmitz added that while the trucks are available with extended warranties, buyers looking for specific warranties, based on their unique operating conditions, have the option of getting customized plans.

The CT681 isn’t going to be the only set-forward truck in Caterpillar’s vocational stable. Next year it is being joined by the CT680, a long nose, set forward. The CT680 will have as 124 inch BBC measurement and will be available as both a truck and a tractor (where the CT681 is truck only).