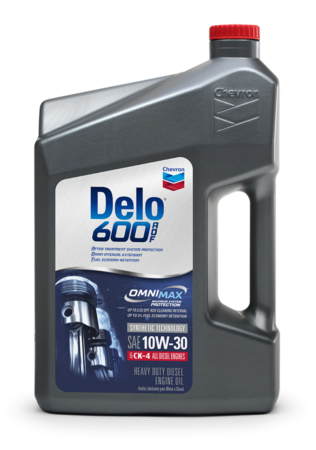 RICHMOND, Calif. – It has been more than 15 years in the making. And, on  Tuesday, Chevron Products Co. took the wrap off Delo 600 ADF heavy-duty engine oil (HDEO).

The company says it will be a “game changer” in the lubricants business, delivering maximum protection to both the engine and the emissions system.

“This is not an incremental change, this is a step change,” said Thomas F. Glenn, president of the Petroleum Quality Institute of America.

Glenn was speaking at a media event at the Chevron Technology Center in Richmond, Calif., where the new oil was developed.

The full Delo 600 ADF line will be rolled out in the North American market Dec. 2, and will include:

“Chevron has taken a customer-forward approach by realizing early on, the extent of the problems caused by the integration of hardware to address the latest emissions regulations and current HDEOs, and today we’re announcing a new solution” said James Booth, commercial sector manager at Chevron.

“Delo 600 ADF significantly reduces the rate of DPF clogging, extending DPF service life by up to 2.5 times, and bringing a 3% fuel economy retention advantage over the life of the equipment, delivering significant savings to customers.”

Kamala Krishna, manager of process research in downstream technology and services at Chevron, said the idea for the product came in 2003 from a comment made by a major OEM customer to a Chevron executive.

She said in that particular case, the customer talked about the need for premature replacements of the filters.

“The question in 2003 was ‘Is it possible to reduce or change the metal additives that lead to the ash that clogs up the filters,’” said Krishna.

“At that time we weren’t sure if it could be done, but Chevron executives thought this was a real-life problem that a customer has, and needed to be solved.”

The aftertrement system people were on board from Day 1, said Keith D. Shaw, global manager for OEM technical services and approvals.

He also said that OEMs have invested $5 million in the past two years to test Delo 600 ADF.

Shaw said a major benefit of the new oil is that it extends maintenance intervals, and that, he said, is “a huge game changer”.