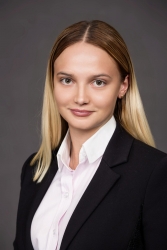 MONTREAL, QC – Andreea Crisan is being called an exceptional young woman who has distinguished herself early in her career.

The Chief Operating Officer and Executive Vice President of Andy Transport has been named by the Women’s Executive Network as a 2017 Canada’s Most Powerful Women: Top 100 Award Winner.

Crisan is receiving the Telus Future Leaders Award, given to young women who show tremendous potential to be able to continue to make a mark for years to come.

Sherri Stevens, President & CEO of PhaseNyne (parent company of Women’s Executive Network), says the group is proud of the more than 1,000 women who have received this award since its launch in 2003, and of the companies that support them.

“Canada’s Most Powerful Women: Top 100 Awards showcases the leaders that are helping to drive positive change and progress and to remind us of the importance of empowering women in our workforce and in the community,” she says.

Crisan says being added to the list of extraordinary women who have received the award is an honor.

“During the summers I spent as a teenager delivering freight across North America with my father in his semi truck, I couldn’t even dream of one day being a leader in the trucking industry and earning a seat in building one of the fastest growing companies in Canada,” she said. “Today, I dedicate this award to all the women who work with passion at Andy as well as to all the women in the transportation industry that inspire me everyday and keep me committed to gender equality and diversity.”