The Ethos 2.8 E85 is a medium-duty truck engine that is specifically designed to run on E-85 fuel, which is a blend of 85% ethanol and 15% gasoline. Because E-85 burns cleaner than gasoline, Cummins says Ethos-powered vehicles should produce up to 80% fewer carbon dioxide emissions (CO2) than a similar gas-powered truck while offering comparable performance and total-cost-of-ownership benefits as diesel engines used in the 19,500 lb. step-van market. 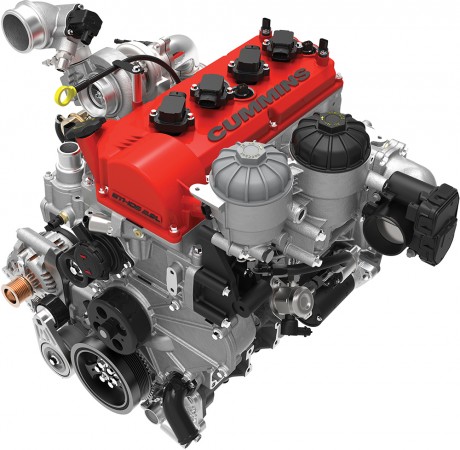 At this point in the engine development cycle, Cummins said after two-and-half years of initial testing (which racked up 1,000 miles and 1,500 hours), the project has entered the final on-road validation testing phase. During its earlier testing, Cummins reported CO2 reductions exceeding 50%.

Besides running on e-85, the Ethos incorporates a number of other features designed to help improve fuel efficiency and reduce emissions, including an integrated stop-start system that shuts down the engine after the vehicle complete stop and the brake pedal remains depressed. A robust starter, smart alternator and sensors have been included to handle the additional stop-start duty cycle. The engine uses Valvoline NextGen oils which have been formulated for lower CO2 emissions

Work has also been done to marry the Allison Transmission 2000 Series to the stop-start system. The transmission uses hydraulic circulation to produce smooth shifts and quick vehicle launch during stop-start driving.

The engine has been incorporated into a prototype Freightliner custom MT45 Class 5 step-van chassis. 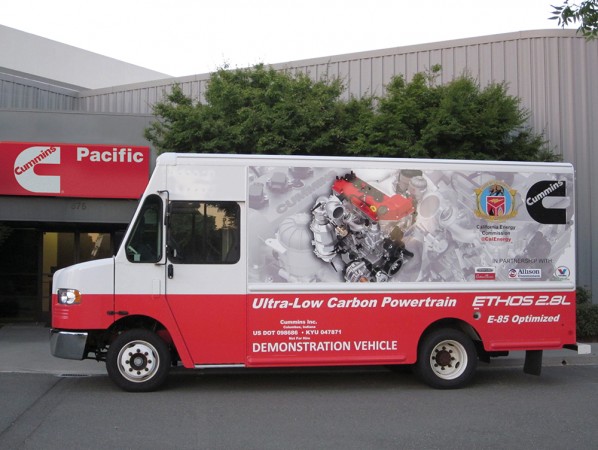 “The Cummins Ethos engine, developed through a research partnership with CEC, clearly demonstrates that by combining innovative engine design and combustion approaches with low-carbon alternative fuels, we can determine a path to significant reductions in greenhouse gas emissions,” said Wayne Eckerle, Cummins vice-president of research and technology.

“Cummins produces industry-leading emissions-controls technologies and products, and we continue to explore new ways to make our company stronger and our customers more successful, while reducing our environmental footprint. We are very appreciative of the CEC’s funding participation in this important effort.”