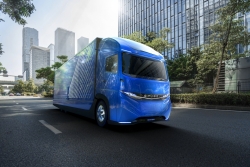 TOKYO, JAPAN – Daimler Trucks has a new product that’s all charged up and ready to hit the road.

Mitsubishi Fuso Truck and Bus Corporation (MFTBC), the majority of which is owned by Daimler AG, announced the first fully electric Class 8 truck at the Tokyo Auto Show Wednesday.

The truck was revealed as part of the E-Fuso line-up, the first product brand launched by an OEM exclusively dedicated to the electric mobility of trucks and buses.

The Fuso launch comes on the heels of the launch of the Fuso eCanter, a Class 4 truck that will deliver later this year.

It also comes ahead of a reported launch of an electrified Class 8 from Tesla, the electric car company owned by Elon Musk. The date for that launch was rumored to be this month, after it was pushed back several times.

E-Fuso’s electric heavy-duty concept truck – named E-FUSO Vision One – has a 300 kiloWatt hour battery with a range of up to 350 kilometers, and a Gross Vehicle Weight (GVW) of about 23 tons. The company says it can carry a payload of about 11 tons, only two tons less than its diesel counterpart.

MFTBC says it’s too early for the truck to have long-haul applications, but it would be ideal for intra-city or regional routes.

The company says the Vision one is just the beginning, and hopes to have a full electric line of all classes of trucks and buses in the next few years. It’s also banking on and increase in infrastructure development, allowing them to have the Class 8 model available for sale to fleets within the next four years.

E-Fuso said its connection to Daimler AG has benefits, allowing it to work with the company’s various arms – like Deutsche Accumotive, which provides the batteries for E-FUSO trucks, and Chargepoint, the world’s largest provider of charging stations and infrastructure, which Daimler has a stake in – to increase its knowledge base and bring products to market faster.