INDIANAPOLIS, Ind. – Ford announced at the Work Truck Show a new F-600 Super Duty chassis cab. The Class 5 truck has a gross vehicle weight rating (GVWR) of 22,000 lbs and rounds out Ford’s commercial vehicle line, which has been completely revamped.

The product line revamp began 13 months ago and included updates to the Transit, Super Duty chassis cab, medium-duty trucks and E-Series. Ford claims to be the only full line manufacturer of Classes 1-7 commercial vehicles. 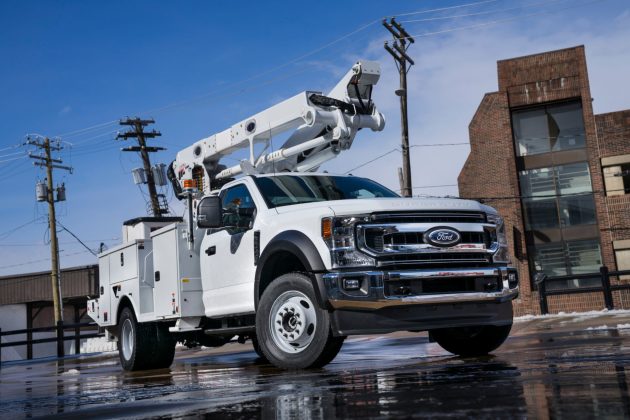 “The updates we’re announcing today were driven by our customers’ focus on improving safety, reducing cost, and increasing uptime and productivity,” said Mark Buzzell, director of fleet, lease and remarketing operations with Ford. “Giving our customers the freshest lineup plus driver-assist technologies and connectivity is a great example of Ford delivering smart vehicles for a smart world.”

New driver assist technologies include automatic emergency braking, which is standard in the 2020 Transit and 2019 Transit Connect, and available as an option in the remainder of Ford’s commercial vehicles.

The new F-600 is designed for customers who need to mount heavier upfits but don’t want to move into a larger Class 6 truck. The company said it falls between the F-550 and F-650. It is sized like the F-550 but has an upgraded driveline and chassis components, as well as higher-weight-rated 19.5-inch tires and wheels. It will be available for order in early 2020, Ford announced, with deliveries beginning in mid-2020.

Mike Pruitt, chief engineer for Super Duty, said the F-600 is “right-sized to deliver the capability of a Class 6 truck, including a maximum GVWR of 22,000 lbs, in that familiar Class 5 Super Duty package. You don’t have to choose between a truck that doesn’t have enough payload or is simply too big.”

The 2020 Transit has been updated, and now can be ordered with two all-new engines paired with a new standard 20-speed transmission, which Ford says will offer improved fuel economy. Exterior updates include an available power sliding door for the cargo van, and three new grilles. The interior gets new fabrics, a redesigned instrument panel and available 8-inch touchscreen. 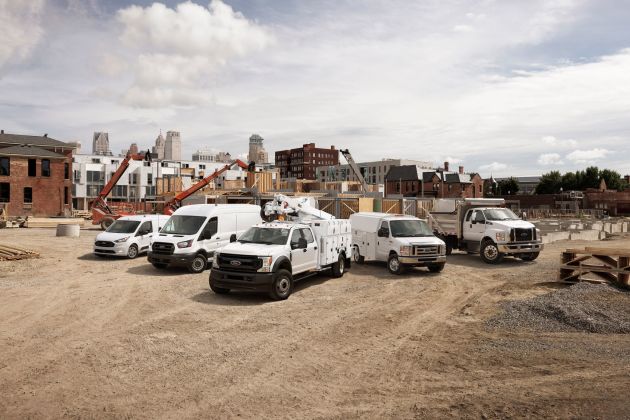 The F-650 and F-750 medium-duty trucks can be ordered with gas or diesel engines.

“We integrated Transit’s new all-wheel-drive system into the vehicle design early on to ensure it does not raise the load floor or seat height, making this van configuration as easy to enter and exit as the standard rear-wheel-drive model,” said Ray Eyles, Ford Transit chief program engineer. “This is a significant benefit for commercial drivers who are in and out of their vehicles dozens of times a day.”

Tim Stoehr, general fleet marketing manager, said “the system continuously monitors and optimizes torque output and can send up to 100% to the front wheels if required.”

It also has drive modes that can adapt to mud and ruts and slippery conditions, “so a driver can tailor their all-wheel-drive system to maximize performance in the specific environment they’re in at the time,” Stoehr explained.

The new engines include a 3.5-liter PFDi V6, which is standard, and an optional 2.0L EcoBlue bi-turbo I4 diesel engine. A 3.5L EcoBoost gas engine is also available, with auto start/stop technology. 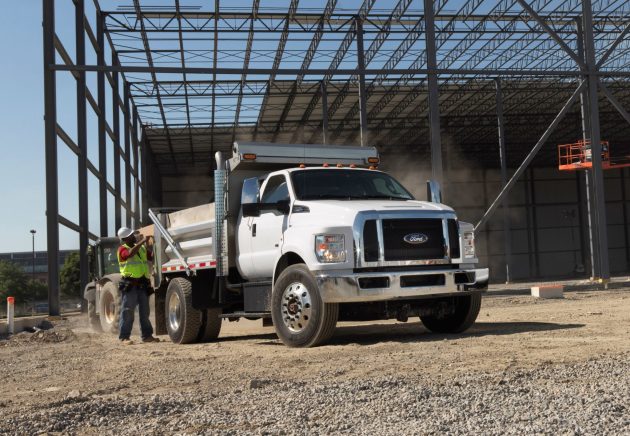 “The North American truck and van business would be a Fortune 40 company with over $7 billion in revenue,” Buzzell said, adding Ford sold more commercial vehicles last year than its closest four competitors combined. It also grew its market share by 1%.

Buzzell noted Ford is now directing 90% of its investment dollars into trucks, vans and utility vehicles.